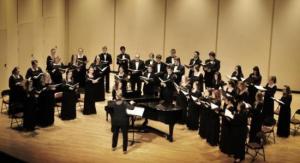 Contributed photo: The Mercyhurst Concert Choir, directed by Rebecca Ryan, have been working diligently to prepare a variety of both well-known and obscure early pieces of music for their first concert of the academic year.

The Mercyhurst Concert Choir will be presenting a concert on Friday, Nov. 8, at 8 p.m. in the Walker Recital Hall at Audrey Hirt Academic Center.

Accompanied by the Cantari Quartet, the choir will treat audience members to a concert of works by composers such as Thomas Tallis, G.P. da Palestrina and Francesco Tuma.

The concert will feature the choir singing both a cappella as well as accompanied works, featuring trumpet, violins and Ian Gayford as pianist for the concert.

Along with the ensemble works, Director of Choirs, Rebecca Ryan, has also incorporated a number of solo works as well as two octets formed from auditioned members of the choir.

The concert itself starts off with three works by Thomas Tallis, which feature various choral music styles. The first piece of music starts the concert off peacefully with “If ye love me,” followed by the first of two octets of the evening and ending with an extremely energetic, fast-paced piece that differs greatly from the first two.

The concert successfully represents various genres of early music, all while keeping the listener entertained. The choir has worked diligently to prepare this selection of music, and no measure has been left untouched or unrefined.