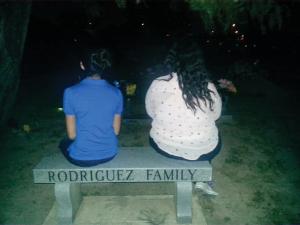 Contributed photo: Rodriguez’s two nieces sit at a memorial dedicated to his brother who lost his life from an act of police brutality.

Mercyhurst Institute for Arts and Culture will be screening the multi-award winning film Fruitvale Station on Nov. 10 at 2 p.m. in Taylor Little Theatre.

The event is open to the public and is $1 for a student ticket or free if your professor is requiring you to be in attendance.

Following the movie Frank Rodriguez, Ph.D., a Criminal Justice department faculty member, will give a lecture.

On the night of New Year’s Day, Grant was senselessly gunned down by a Bay Area Rapid Transit Police officer.

His murder was seen time and time again because of cell phone cameras capturing every moment of the event.

Rodriguez, a former police officer, was selected to speak at this event because of his experience in the use of lethal force in the field.

Rodriguez also has experienced the pain of seeing a family member die because of the wrongful misuse of lethal force.

He lost his younger brother to an act of police brutality that was the driving force behind his pursuit of a Ph.D. in the criminal justice field.