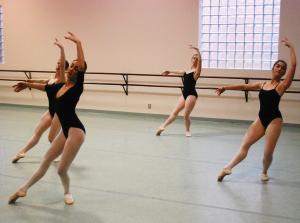 The dance is made to match this year’s theme of happiness, with most of the dances reflecting a generally joyful theme.

Mercyhurst choreographer Melissa Bobick described the theme of her own contemporary piece.

“I was inspired by the idea of children playing in the fall weather. The dance is supposed to depict that care-free feeling,” she said.

The show consists of six separate performances, each with its own choreographer. The dances are classical, contemporary and modern numbers with a varying amount of dancers per performance.

Each dance group had to audition for the performance, though some were split in half with a different group taking two of the four performances.

The dancers and choreographers have been working on the performance for the majority of this school year.

When asked if there were any difficulties, Bobick said, “It has been a strain trying to figure out a schedule that fits all of the choreographers and students.

The switch from trimester to semester has been something for us to get used to as well.”

Tickets for performances are $15.50 for adults and $12.50 for seniors and students. Mercyhurst students will be admitted for $3.50.

A preview performance will also be offered on Friday, Nov. 8, at 4:30 p.m. with all tickets selling for $5 (balcony seating only).

The choreographers of each act are Melissa Bobick, Tauna Hunter and Noelle Partusch. Mark and Solveig Santillano collaborated for a piece.

Ursula Payne, who chairs the Department of Dance at Slippery Rock University, was commissioned to choreograph a piece for “Happiness is Dance.”