A few weeks ago, I attended the Campaign for Liberty’s Northeast Regional Conference in Valley Forge. I was on the ropes for quite some time about going and signed up at what was essentially the last minute. Looking back, I can’t see why I hesitated for a second. There was something I experienced at the conference that wasn’t on the agenda. It was on the faces of attendees and in the hallway conversations. It was scribbled down on notepads and brought home to districts across the Northeast. I wanted to try and capture that message briefly and bring it back for everyone to hear.

For me, the week started when I reached my hotel room with friends from New York and Connecticut and checked my RSS feed for news. Peter Schiff had announced he had entered the Connecticut Senate race that morning. We grabbed coffees and made our way to the convention with much enthusiasm. There were many quality sponsors’ tables set up at the convention. The beautiful
Ladies of Liberty Alliance was on hand and getting plenty of attention. I had a brief moment to meet Jake Towne, a Pennsylvanian who is running for Congress in the 15th district.

One of my favorite groups, The Foundation for Economic Education, had a booth on site with a few staff members. We all got a copy of “The Free Market and Its Enemies,” a “Common Sense: Revisited” pamphlet, “Five Steps to Freedom”, and other various free swag. The Young Americans for Liberty (sound familiar?) were all over the convention shaking hands and distributing material. Their presence is always encouraging. The Good Doctor, Ron Paul, was flocked by admirers but I had time to have him sign my copy of “End the Fed” and ask him a quick question.

Day two started at breakfast with Ron where he talked about his new book and took enthusiastic questions from the attendees.

When breakfast ended the training began with the fiery and successful Mike Rothfeld and his counterpart Dimitri Kesari. It is important to make special note of the training. One could easily notice the furious note taking of strange people that spent a beautiful Friday night in a convention hall to equip themselves for a fight. It is uplifting what our people do to support a cause they believe in. These will be the people on the ground during the next round. 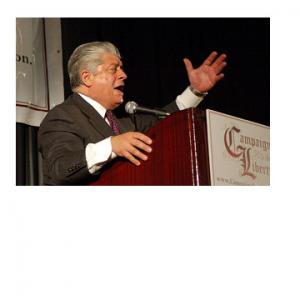 After dinner, an impassioned speech in which he harpooned the erosion of our civil liberties that the political duopoly has engineered, invoking several standing ovations. I thought the Judge was going to hurdle the podium, jump on a horse, pull an AR-15 from behind his back, and lead us to Washington on several occasions.

When the judge was done laying wasteto the establishment it was time for the world premier of “For Liberty.” You could feel the energy of the attendees when creators Chris Rye and Corey Kealiher walked onto the stage of the viewing area. If there was any skepticism of the quality of the documentary, it was surely blown away as it captured the spirit of the Ron Paul phenomenon. Thomas Kubica: A Regional Coordinators from Pa. gives an introduction before the premiere of &quot;For Liberty&quot; at the Liberty convention earlier this month.

The documentary is an emotional roller coaster. The crowd in attendance cheered, hissed and teared up as we all relived the highs and lows of the election. At the after party, Jordan Page laid down an acoustic cover of Pink Floyd’s “The Wall” while people talked over drinks. When I asked Chris Rye if they would be willing to do it again, he reported they were already kicking around new ideas. “For Liberty” is a steal at $20. Don’t think about it. Go buy it. You won’t be disappointed. These guys will be a big part of the Liberty movement going forward and will need the financial support.

The final day started with the Campaign for Liberty State meetings. As the several Maryland chapters took turns speaking, you could already see the wheels turning and ideas blossoming. Tom Woods gave a great speech on the history and philosophy of human rights which led into the remaining training sessions of the convention. The convention wrapped up with the Economic Liberty Symposium at which Tom Woods, Peter Schiff and Daniel Hannan spoke. The combination of wit, vision and eloquence was a perfect finale. I highly suggest you listen to, at the very least, the famous Daniel Hannan speech.

Three days later, Ron Paul trounced Trey Grayson with a huge fund raising event and it was announced that H.R. 1207 would have a hearing. In case I have failed to capture the message above, Dan Hannan’s finale speech summarizes it perfectly: “My friends, it is apt that we meet here in Valley Forge. It was hither that George Washington repaired at his lowest moment when everything seemed lost. And now you, the heirs of The Revolution, the Sons of Liberty of our day, have come here having seen last year’s election won by people who, contrary to the legacy of your founding fathers, saw answers in more spending and more government. In a way it is your lowest moment too. Washington had some very black times as he looked out across the snow and contemplated the end of The Revolution. What he couldn’t see, but what we know in hindsight, is that (Valley Forge) was the turning point. That was the beginning of the vindication of the dream of your founders. The birth of a new republic. And what was forged here was the iron of the soul of a nation.”

The Democrat plans for control of the health care market is losing steam. Republicans have been paying attention to our message. There is no doubt we will have to put some Democrats to bed with a warm glass of milk in 2010 and scalp a few Republicans in 2012.

However, make no mistake; the Liberty movement is having an impact. The message I wanted to bring back from Valley Forge is the message of hope for the future and enthusiasm for the cause of Liberty. The attendees of the convention experienced it and I’m sure those across the internet see it. There was an average of 1,500 people there each day. And trust me, you’ve never seen a look like the one given by numerous elderly couples out for a night of ballroom dancing when they see 1,500 hardcore Patriots whooping and cheering for Revolution (with love) and 20,000 guns upstairs as part of the Valley Forge Gun Show–priceless.

There is another message I wanted to bring back. A response from a question quickly asked. A response given with a smile. A response of which it may be best to just forget for a while…”It’s too early to talk about that yet”. But then I read this yesterday, there may be hope for America yet…