It marks the highest seed ever received by the Lakers. The Lakers had two key wins on Saturday against George Washington University (9-8) and John Hopkins University (11-6).

“Our record can be a little misleading because the teams we play vary each year. We have kept our training similar to last year to try to repeat the success we had. So far it has worked well,” senior goaltender Matt Cote said.

With a record of 17-4, the Lakers have had a very successful season and are looking forward to the championship this weekend in Annapolis, Maryland. 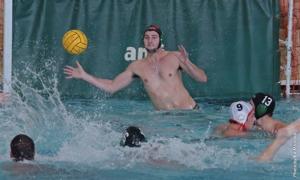 “The Division II championship was a great cap on a long October of divisional games. It put us in the playoff mindset and prepares us for the Southern and Eastern Championships coming up this weekend and the following weekends, respectively,” Cote said.

The U.S. Naval Academy is hosting the Southern Championship this season. The tournament begins with four games on Friday, Nov. 8. Mercyhurst opens its action on Saturday against the winner of Friday’s George Washington-Salem International match. With a victory there, the Lakers would advance to the semifinals on Saturday.

“The team has been doing well so far. We are at the point in the season where it’s all about execution and fixing the little problems,” Cote said.

With a total of six freshmen this year, the Lakers are honing their skills and preparing for the end of the season championships.

“The freshmen have surprised me in how they adapted to the faster speed of collegiate level water polo versus high school. I feel comfortable leaving the team in their hands for the future,” Cote said.

The Lakers will be losing nine seniors this year and are looking forward to growing their team and having another successful season next year.

“All of the seniors have really stepped up this year, and the underclassmen are following by our example. We all know the expectations of ourselves this year and it will take the entire team to reach and exceed those goals,” Cote said.

The Lakers are looking forward to the CWPA Championship this weekend.