Ending their season with a 9-9 record, the Lakers had the best season on record since 2009 and are looking to carry it over into next year’s campaign.

With a tough loss to Bloomsburg University (2-0) on Saturday, the Lakers still played a strong game.

They were able to catch a total of nine wins this season along with 45 points which is the best the Lakers have seen since 2002. 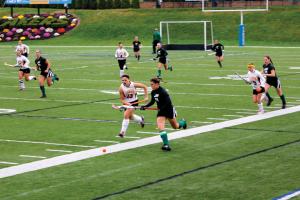 Alison Ockasi photo: Ending their season with a 9-9 record, the Lakers had the best season on record since 2009.

The Lakers are losing six seniors this year, and hope to gain some more talented players during the 2014 season.

Some key players this season were junior Blair Pembleton who led the Lakers with 11 goals and 24 points. Senior Meghan Smith had a record of six goals and a team-high seven assists, and junior Kelsey Lovelace with eight goals.

The Lakers have ended their season strong and looking for another unforgettable one next year.