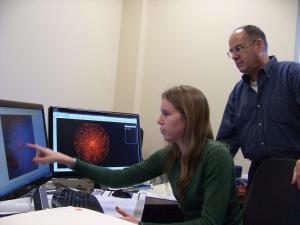 Caitlyn Merkel photo: Melonie Richey and Prof. Kris Wheaton designed a game to showcase at the National Defense U.

Many of the upperclassmen in the Intelligence Department know of Professor Kris Wheaton’s fascination with games. He uses them in his courses to help students implicitly learn concepts that will be helpful in their futures as analysts.

“Games,” he says, “are great for teaching without teaching.”

He uses the example of poker players and probability to further explain the concept.

Games are also capable of teaching students how to avoid biases in judgment.

Wheaton and Melonie Richey, a second year graduate student in the Intelligence Studies program, recently took this idea to the Center for Applied Strategic Learning at the National Defense University.

The pair showcased a game called The Mind’s Lie, a game of their own design meant to help participants learn how to avoid cognitive biases through the use of realistic scenarios.
They taught some of the nation’s top analysts, game designers and simulation experts how to play the game, while also displaying Wheaton’s research on the effectiveness of games-based learning.

Both the game and the research were well received at the CASL, which is tasked with improving the “strategic decision making and critical thinking capabilities” of leaders from the US and all over the world.

Elizabeth Bartels, a CASL research analyst and the sponsor of the Mercyhurst team’s workshop at the NDU, voiced great excitement for the results of the workshop.

“The demonstrations offered new tools for government teachers working to integrate cognitive issues into the education of policy makers,” she said.

While this high praise is a great example of how Mercyhurst is seeking to be on the cutting-edge in improving intelligence analysis, the importance of this event is best summed up in Wheaton’s words.

“It was a pretty big deal to be invited to present the workshops to top people involved in gaming and simulation within the Department of Defense; the fact that they loved it was an even bigger deal,” he said.