With a record of 6-4-1 and being ranked no. 10 in the latest USCHO.com Division I Women’s Hockey Poll announced Monday, the Mercyhurst women’s hockey team is fighting to make this season one to remember.

The recent drop in the poll was due to the split with Robert Morris University (2-0; 2-3) last weekend. But that is not stopping some significant players who have made it a point to step up for the team.

Junior goaltender Amanda Makela was recently selected for the CHA goaltender of the month award.

“It’s a great feeling to be recognized by the league. It’s also a compliment to the team as a whole. I have to give them a lot of the credit, they played very well in front of me blocking shots, lifting sticks and getting clears,” Makela said.

Makela has been a great resource for the team, playing in every game thus far, and having a total of 258 saves, and average 1.73 per game. 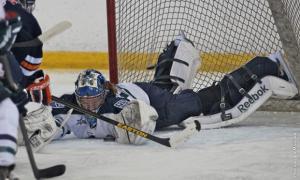 Ed Mailliard photo: Junior goaltender Amanda Makela was recently selected for the CHA goaltender of the month award, having a total of 258 saves.“After a rocky start, we have been able to grow and improve. As a young team, I think we have done well but we also have room for improvement. Every game provides us with more experience in which we are able to learn from,” Makela said.

“We take what we have learned and apply it to our practices every week in order to constantly improve to continue our success as the season continues.”

The Lakers are outscoring their opponents 29-18 in 11 games played this season. Mercyhurst continues to outshoot their opponents 419 to 284 and are averaging 38 shots per game. They are ranked 14th in combined special teams and are seventh in penalty kills.

“Everyone plays a different role on the team to help us win games. Our upperclassmen including Christine Bestland, Christie Cicero, Molly Byrne, Caroline Luczak, Shelby Bram and Kaleigh Chippy have been key players that have helped the team come together.

“They all possess the leadership, hard work and communication skills needed to lead our team on and off the ice,” Makela said.

Another player that also had great success this past weekend was sophomore Emily Janiga was named the CHA Player of the Week. Janiga, who had a goal in the 2-0 win and added a point in each Mercyhurst goal during Saturday’s contest.

“CHA League games also provide many challenges. Mercyhurst is always a top contender for league champions and therefore, we are the team to beat. We know that every team will bring their best so we have to work hard to continue the program’s success,” Makela said.

“We would like to thank the Mercyhurst community for their continued support throughout the season,” Makela said.

The Lakers’ next series will be on Friday and Saturday against Syracuse University at the Mercyhurst Ice Center. The puck is set to drop at 7 p.m. Friday evening.