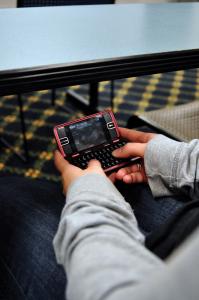 Texting while walking can be dangerous, and for some deadly

You depart for class in the morning only to discover you’ve forgotten your cell phone at home. For most students, this predicament foreshadows a horrible day. There will be no in-class text messaging, leaving students with only one choice: actually paying attention to the day’s lessons.

While this spells doom for most students on campus, what does a day without text messaging mean for one’s mental and physical health? Is today’s text-dependent society onto something good or destined to struggle in school and the workforce due to multitasking overload?

Recent research by Dr. Ronald B. Herberman, director of the University of Pittsburgh Cancer Institute, suggests that talking on a cell phone is potentially dangerous as the prolonged exposure to a cell phone’s electromagnetic fields could cause cancer.

While there is little evidence to confirm Herberman’s research, in a CBC news article he references a “growing body of literature linking long-term cell phone use to possible adverse health effects including cancer.” Herberman suggests precautionary measures such as keeping cell phones away from the head by using speakerphone, a wireless headset or text messaging.

While numerous doctors have commented on the health benefits of using texting instead of cell phones, text messaging is not completely safe for those who have become addicted to multitasking.

Kelley Loftis of Tech&Learning recounts several instances in which text messaging turned deadly. In 2008, a woman in San Francisco was killed by a pickup truck when she stepped off the curb while texting. She also notes a young boy from Florida who died after walking directly in front of a moving car while looking at his cell phone screen to send a text.

Though texting while walking can be dangerous, text messaging while driving often produces equally fatal results.

“A 2007 American Automobile Association study found, for example, that 46 percent of 16 and 17-year-old drivers send text messages while driving,” Jace Galloway-Shoemaker wrote in ‘The Benefits and Risks of Texting.’

And, it’s not just teenagers who have embraced the trend. Kelly Loftis reports that “the most deadly train crash in 15 years has been attributed to text messaging” (The Pros and Cons of Texting and IM). Though the details of the crash are absent from the article, the National Transportation Safety Board has concluded that the train’s engineer was texting while driving moments before the crash occurred, likely reducing his ability to pay attention.

“I try not to text while driving, at least on the highway. I have done it, but as little as I can. On a normal road, I try to limit it to red lights or when driving slowly,” Mercyhurst junior JT Kohnen said.

The number of accidents attributed to text messaging makes it apparent that texting can easily dominate one’s focus, and this trend can be further reflected in students’ schoolwork.

In an article by Tom Wolsey, communication theorist Tom Welch explains texting as learning a new dialect, emphasizing that “there is nothing wrong or improper about teaching teens to use language in different ways,” suggesting that text messaging may even boost students’ reading and writing proficiency.

In an article from CBC News, Michael Abramson of Monash University says that using predictive texting software to complete words is increasing people’s response rate, training them to be faster – and more inaccurate.

Some teachers have found contrary results, citing drastic differences in students’ writing habits due to the texting phenomenon.

“Students are integrating the abbreviations that are used in texting or instant messaging into their schoolwork,” Loftis writes.

Loftis also found that in a survey of 65 students conducted at Southern Lee High School, 86.4 percent of students text message during class. This drastically large number suggests that the majority of students are not giving instructors their undivided attention.

Mercyhurst senior Colleen Gaffney said, “Texting doesn’t distract me at all. I check my phone regularly during class, but it doesn’t mean I won’t be able to focus in class or on homework.”

In contrast, senior Dave Swickline said, “I don’t text during class. It is disrespectful to the teachers, and I feel that if I did text I would be too distracted to pay attention.”

Regardless of one’s stance, text messaging is here to stay. One must consider whether the conveniences of text messaging outweigh the hypothesized negative impacts before making the decision to put the cell phone down.