Another exciting season ahead for Mercyhurst wrestling

After finishing a great season last year, the Mercyhurst wrestling team is hoping to carry that into this season with strong veterans and newcomers.

Although performing well last year, there are new people and it’s collectively a different group of guys, something that has to be put into consideration when preparing every day.

“The guys are working hard. The focus is to get better each day so that they are the best they can be when the post season comes around,” said Mercyhurst Head Coach Mike Wehler.
For the upcoming season, the team wants to use last year as momentum while continuing to get even better with more potential top place NCAA finishers.

“Our expectations are to build on the successes we had last year. This is a new season and a new team and we have to earn all of our successes this season.”

“We had four guys at the NCAA tournament with one All-American. The goal is to get more of our team to NCAA’s and on the podium,” said Wehler.

“The freshmen have been doing well. Right now we have two in the starting lineup who are off to a very good start. We also have a redshirt-freshman, Francis Mizia, who is performing very well.” 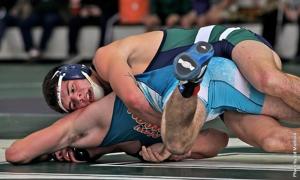 Ed Mailliard photo: After finishing a great season last year, the men’s wrestling team is hoping to have yet another great season.

With seven freshmen on the team this year, the possibilities of big future stars rising is likely.

So far this preseason, freshman Dakota Deslauriers and Andy Welton have stood out and will be starters; Deslauriers in the 184 weight class and Welton in the 285 class.

For the Lakers, the goal this year are not only to finish in the top 10 at the NCAA tournament but to continue to do well academically.

The past two years the Lakers showed great success in the classroom as well by having the highest team GPA in the conference. Last year marked the first year that Mercyhurst had the highest GPA in the country.

Another important conference goal for the guys is to win the PSAC Dual meet championship again which can represent the strength of the team as a whole.

The Lakers look forward to their next match on Saturday, Nov. 23, at 3 p.m. against Wheeling Jesuit University in Wheeling, W.Va.