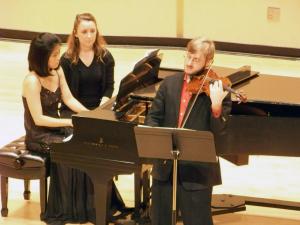 Caitlyn Merkel photo: Shirley Yoo, Ph.D., Joseph Kneer, Ph.D., and page-turner sophomore Sarah Rearick collaborated on a faculty recital as a continuation of the various performances for the year.

The D’Angelo School of Music at Mercyhurst University gives many recitals and performances across the academic year and of the most revered are those given by the faculty themselves.

Joseph Kneer, DMA, obtained both his masters and doctoral degree from the Peabody Institute at Johns Hopkins University in Baltimore, MD, where he was awarded a full-tuition assistantship in Ear Training.

He joined the full-time faculty of the D’Angelo School of Music in 2012 as assistant professor of violin, viola, music theory, aural skills and has previously taught with the Peabody Preparatory and the Janna Friedman Music School.

He was accompanied by Shirley Yoo, DMA, professor of piano at Mercyhurst. This past Thursday they gave a recital for the community that featured multiple eras of violin literature.

The program started with J.S. Bach’s Sonata No. 3 in E Major for Violin and Harpsichord, and while this is one of many in the composer’s collection of violin repertoire, Kneer and Yoo’s collaborative performance was far from lifeless.

There’s a certain sort of reverence that comes with music that, although it was written hundreds of years ago, is still being played today.

This particular rendition adhered to that; it was played with the correct etiquette and style of the Baroque period but with no less emotion or color.

Following Bach on the program were violin sonatas by Debussy and Brahms, two of the more renown composers from the Romantic era. Claude Debussy’s Violin Sonata in G minor was written in 1917, just under a year before the composer’s death.

It was the last piece he had written, and its premiere in May 1917 was Debussy’s final public performance.

Along with Maurice Ravel, Debussy was an integral character in the impressionist movement, although he didn’t associate himself as such.

His music served as great influence to composers of the early 20th century, and his G minor Violin Sonata foreshadowed the musical style of 1920s France.

Also performed was a violin sonata by Johannes Brahms, another familiar figure of the late 19th century.

As with all music there is an emotional precedent and, though not stated explicitly to the audience, Dr. Kneer made the story he was telling quite clear in his handling of the piece.

“The last movement is characteristic of raindrops,” Kneer said. “Or perhaps the childish awe that might come from them.”

Brahms’ beautiful Violin Sonata No. 3 was told with a strength and sensitivity that was so characteristic of the Romantic era and could move an audience who had heard it rendered many times before or who might have been listening to the piece for the first time.

Kneer and Yoo left no empty space on the stage in their performance.

The recital’s program concluded with Paganini’s Variations on I Palpiti, a more light-hearted and cathartic follow up from the emotionally saturated pieces prior to it.

Meant to be played with charm and a touch of humor, Kneer was unafraid in breaking the fourth wall that separates musicians from their audience.

Even after playing notably very difficult chromatic passages he’d exclaim to himself in relief of having played it properly.

It’s not usually protocol for an audience to laugh aloud with the performer, but here, Kneer has said, it is perfectly acceptable.

A variation that offered a charismatic display of overtones (harmonic partials that are discreetly present in each pitch) was a quintessential depiction of playful, classical music charm and a perfect closer to the night’s program.

The D’Angelo School of Music will continue its Faculty Recital Series with a Faculty Collage on February 6.