The Mercyhurst University women’s hockey team captured its third straight win after a 3-2 win over St. Lawrence on Wednesday afternoon on Nov. 27, which improved its season to 10-5-2.

This is the team’s first series sweep since it played University of Maine. The Lakers also improved to 5-1-1 on their home ice. St. Lawrence, a member of the ECAC conference, dropped to 6-9-1 overall this season.

“The team so far is doing well. We have a young group and it took a little more time to get everyone on the same page and rolling, but I think we are starting to hit our peak and are working at our full potential,” senior Christie Cicero said. 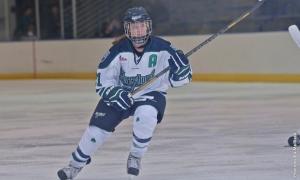 Ed Mailliard photo: Senior Christie Cicero was a force during the St. Lawrence series with goals in each game on Tues. and Wed.

“This weekend against St. Lawrence was awesome. It was the weekend we needed. Not only did we get the sweep, but we worked to our potential and played to our level. We have been struggling with getting everyone to play as a team and work a full 60 minutes, and I believe this weekend we really drew a line in the sand and said enough is enough we need to get to work and start playing hockey like we all can,” Cicero said.

Cicero scored two goals to propel the team over St. Lawrence University on Tuesday evening, along with sophomore Katherine Donohue who scored one goal.

“The sophomore class has been a significant part of our success and play this year. They have, I think, eight or nine girls in that class which is huge. They have really taken on a new role, every single one of them, and I think they have the greatest impact from play to leadership,” Cicero said.

“The freshmen are doing fantastic. They are being thrown right into the fire and learning quick. The girls have been helpful with teaching the freshman the ropes and they have finally got their first year jitters out. They fit into our team very well,” Cicero said.

The next series that the Lakers will take on will be Penn State on Friday, Dec. 6, and Saturday, Dec. 7 at the Mercyhurst Ice Center.