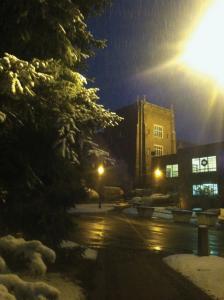 Contributed photoThe Middle States Commission on Higher Education issued a warning on Nov. 21, 2013, to Mercyhurst University, warning that the university’s “accreditation may be in jeopardy because of insufficient evidence” that it complies with requirements regarding learning assessment.

University officials are confident, though, that Mercyhurst will meet commission’s requirements on time and that the warning will be rescinded. The commission stressed in its notice that Mercyhurst remains accredited. (For more information on the warning, go to its website.)

“We’re definitely on the right track. We’re hoping to have our assessment function sufficiently improved by next fall,” Philip Belfiore, Ph.D., Vice President for Academic Affairs, said about the warning.

He noted that Mercyhurst did well in the other factors examined by the Middles States commission.

“After assessing the school’s administrative and academic components, the only place in which we were lacking was our ability to assess our academic programs,” he said.

The commission requires that Mercyhurst assess student learning outcomes from courses, from majors and from their overall academic experience at the university. Those assessments must be properly documented at every level, gathered and then used by the university in its decision-making.

Schools are also required to meet the Middle States Commission standards as a way to ensure that it meets its mission, goals, performance and use of resources. In part, that is where the assessment of learning outcomes comes to play.

The Middle States Commission’s official warning followed several notifications to Mercyhurst over the years that its assessment function was lacking. Mercyhurst did not take enough action in that time to meet the commission standards.

The commission’s warning is actually not an uncommon occurrence among universities, Belfiore said. Most universities that receive the warning make the recommended changes in due time and keep their funding. According to the Middle States website, five higher education institutions, including Mercyhurst, are on warning status. Three are on probation. Fifty-five had their accreditation reaffirmed, according to the web site.

Though the official warnings are somewhat commonplace, actually following up on it and revoking the government funding is rather rare, Belfiore said.

“In all my time here I’ve never heard of a university being shut down because of an accreditation issue,” Belfiore said when asked how often an official warning comes to fruition. As of now, Mercyhurst is on schedule in the revision process, Belfiore said.

In November, Mercyhurst faculty and administration developed a rubric to guide the improvement of the assessment function. That resulted from an intense effort by a number of faculty and administrators who have worked on the process since the summer. Dyan Jones, Ph.D., and Mary Breckenridge, Ph.D., largely led that effort.

During the most recent visit by Middle States Commission on Higher Education officials, they remarked on the good progress the school was making towards its goal of having the assessment function up to standards by next fall, Belfiore said.

For any questions or concerns about the accreditation issue, Belfiore can be found at Old Main 104 or reached at pbelfiore@mercyhurst.edu.