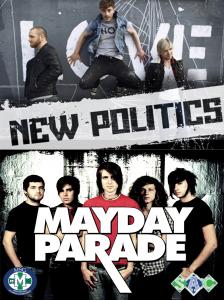 Contributed photo: Mayday Parade and New Politics were the bands chosen to perform at this year’s Springfest.

Every year, as almost all the students know, Mercyhurst puts on an event known as Springfest, a weekend of festivities to celebrate the end of the year.

It ends with a massive concert where the University brings in a popular artist to give a show for the students.

“We took some of the energy we had last year with White Panda and Super Mash Bros and we transformed it into live bands,” said Lewis.

“We took polls among the students to see which genre would be most popular. Alternative rock was definitely the winner.”

The announcement, however, came a little later than many students had expected.

The process of how Springfest is organized was one of the topics of the conversation.

The process, which started back in October, is fraught with difficulties, such as refusals from artists. “We submit about 30 bids and we get a lot of ‘no’s. That’s definitely the hardest part,” Ennis said.

The reason for the delay was actually contract-related.

“One group wanted to perform first, and the other did,” said Lewis.

“Thankfully, we had a fantastic agent to help us out. He was able to calm them down and help us get the whole issue sorted out,” she said.

And while the announcement was delayed, it wasn’t without reserve on the part of the planners.

“We wanted to announce, but thought that we shouldn’t while things were still up in the air,” she said.

Despite the slight delay, the student body received the announcement on Thursday.

Another issue which came up during the interview is the issue of how Springfest works.

In years past and this year as well, the concert has been free to the students.

Some students have stated that they would be willing to pay for tickets if it would bring a better or bigger act to perform.

“Most students say that they would pay about 10 to 20 dollars for a ticket, but it wouldn’t be that helpful,” Ennis said.

Despite the difficulties which may have plagued the show at the start, the planners are enthusiastic for the concert and Springfest in general.

Ennis’s words best sum up the view of the planners: “It’s going to be a fantastic year.”