Feller plans to use double major to be double prepared

Certain to become a success, Danielle Feller is more than the average math major—she can dance, too.When she entered Mercyhurst she could not settle on just one major.
Tyler Stauffer photo
She always wanted to be a math teacher, and when she tried to give up dancing in high school, she simply could not go without it.

When asked how she maintains the often heavy workload, Feller said, “Time management,” with a smile.

She takes courses in the summer so she can get the required number of credits and then transfers them. Feller must also take a class or two at another college to meet the necessities for her math major.

Feller hopes to become a high school math teacher after her dancing career. She wants to teach in an environment where academics and dance are equally stressed, like a charter school.
Her hopes are to be the coach for a dance team.
Tyler Stauffer photo
As far as dancing goes for Feller, she is in SoMar, the local modern company directed and established by Mark and Solveig Santillano, two of the dance professors at Mercyhurst College.

She elected to be in SoMar because she wanted to satisfy her thirst for more dancing, particularly modern and partnering.

Feller plans to audition for commercial-based dance troupes or talent agencies, cruise lines and Disney. Since her forte is more modern and contemporary-based, she wants to do more stylized and entertainment dancing. 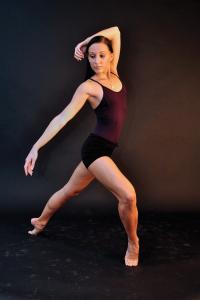 Tyler Stauffer photo
Feller says her favorite part of dancing is that it means something because there is so much involved in it.

Trained in music, Feller is inspired by the relation of movements to the music.