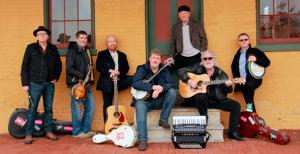 miac.mercyhurst.edu photo: The Irish Rovers will be performing on Saturday, March 8, in the PAC as one of their last stops on their “Farewell to Rovin” tour.

For more than 50 years the Irish Rovers have played their music all over the world. As their music career comes to end, they are stopping by Mercyhurst on March 8.

Mercyhurst is just one of the early stops on their “Farewell to Rovin’” Tour, which is traveling to Canada, Australia, and New Zealand, is thru December of 2015.

Though all members are originally from Ireland, the band was formed in Toronto, Canada, in 1963. The band of eight has released over 40 albums worldwide.

The Irish Rovers have not only been successful musicians. They have found their way to the big screen numerous times.

They have hosted three television talk shows, guest starred in “The Virginian,” and filmed “Home in Ireland,” a movie made for television in Northern Ireland.

One of their recent hit singles, which led to a whole new album, is named “Drunken Sailor,” and was released in 2012.

Though they have a very long history in the music and performance industry, they are looking forward to finishing the tour strong.

On Saturday March 8, the performance will take place at the Mary D’Angelo Performing Arts Center.

An hour before the show will be free beer tasting provided by Lavery Brewing Company and fun Celtic tunes performed by the local band The Bangerzz.

The concert is a great way to kick off spring break and get in the spirit of St. Patrick’s Day, which is right around the corner.