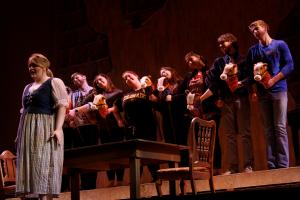 This weekend, the Performing Arts Center (PAC) will host the Mary D’Angelo School of Music’s annual spring opera. This year, the school has decided on the well-known fairytale, “La Cenerentola.” Although most people are more acquainted with the English translation of the title, “Cinderella.”

Treated like a servant by her ridiculous father and stepsisters, Cenerentola eagerly awaits the day that a prince will come to sweep her off her feet and free her from her life as a maid.

With a little help from both the prince’s tutor and his valet, Cinderella and her prince live happily ever after. La Cenerentola is full of laughs, using cleaver composing, Giaochino Rossini allows the audience to hear each character’s story while never losing sight of the well-loved story.

Composed by Rossini, the tale follows the basic story line we are all familiar with; however, it contains a number of small, yet important details that have been altered.

Rossini greatly preferred story lines that focused more on earthly, natural elements rather than focusing on all the enchantment and magic that the original story contains such as the fairy godmother, glass slipper or a magic pumpkin.

In Rossini’s “La Cenerentola,” the evil stepmother is replaced by a stepfather and the fairy godmother is changed to a character named Alidoro, who acts as Prince Ramiro’s tutor and a philosopher.

The last major change to the story is the glass slipper. Rather than a slipper, Cenerentola presents Prince Ramiro with one on her bracelets, telling him that if he searches for and finds her, and he still loves her, she will be his.

The production will feature a combination of Mercyhurst students and faculty along with veteran vocalists and instrumentalists from the Erie community.

The cast consists of 15 members, only two of which are hired from the Erie area. The orchestra contains a healthy combination of Mercyhurst University students and hired professionals.

Make no mistake, though, what this show lacks in ‘magic,’ it certainly makes up in pure comedy, both through the writing of Rossini and the brilliant stage direction of adjunct faculty member James Bobick.

Bobick has worked extensively with the students of the music department to make each of their characters a real person with real emotion. What has come of this is a collection of moments ranging from heartwarmingly sentimental to downright hilarious.

“The opera has been an incredible challenge, but the payoff has been even more than worth it,” said sophomore chorus member Elizabeth Klucher.

“I’ve learned so much more about opera, about the people I’ve been lucky enough to work with and myself. Each and every person involved has brought so much to the table . . . it’s unreal.”

“Everyone has exhibited extreme professionalism both on and off the stage, bringing the story to life. Lively and dramatic—this will be one to remember,” Ballantyne said when asked about the rehearsal process leading up to this weekend’s show.

Scott Tomlison, Ph.D., chair of the department, conducts the orchestra, which is made up of both university students and hired professional musicians, with harpsichord accompaniment by Louisa Jonason, assistant professor of Voice.

“La Cenerentola” will be running for two performances this weekend. The show dates are Friday, March 28, at 8 p.m. and Sunday, March 30, at 2 p.m.

Tickets for this event are $15.50 for adults, $12.50 for seniors and students, $7.50 for president’s cardholders, $5 for youth (12 and under) and $5 for Mercyhurst University students with valid Student IDs.

Tickets can be found at the PAC box office at the door and are also available by pre-order at the door, at miac.mercyhurst.edu or by calling (814) 824-3000.