Dylan D’Urso and Jeremy Landowski of the Mercyhurst wrestling team received All-American status after just day one of the NCAA Division II National Championships.
The championship meet was held in Cleveland, Ohio on March 14-15.

To receive All-American status, a wrestler must be in the top eight in their weight class. Also, wrestlers have to win at least two matches at nationals.

“Anytime you have guys place at NCAAs it’s exciting. These guys have dedicated a great deal of time and effort to achieve their success. We also have some other very talented guys who have the ability to replicate their success at the national tournament, which is very exciting for our program,” Head Coach Mike Wehler said.

D’Urso is a sophomore and made his second appearance at the National Championship, coming back even stronger than last year after falling short of All-American status in the quarter finals.

“Coming into nationals this year I knew I was physically in better shape because I was not cutting as much weight and my body wasn’t drained. We work extremely hard every day throughout the season, so I knew my conditioning would be as good if not better than everyone else in my weight as well,” D’Urso said.

After starting off the tournament with a win 2-1 victory, D’Urso fell in the quarter finals but came right back to pin his opponent in 3 minutes and 15 seconds time to receive the All-American honor.

D’Urso also finished third overall at the championship. This is the highest finish a Mercyhurst wrestler has had since 2010.

“From a mental standpoint I was much better prepared this year. I knew that I was one of the top guys in the country and deserved to be recognized as that. I didn’t let the pressure of succeeding get to me and just took one match at a time and focused on what I could control out on the mat. Coach Wehler did a great job of convincing me how well I really could do,” D’Urso said.

Red-shirt sophomore Landowksi started off the tournament with a loss but won two consecutive matches in the quarter finals right after with a 6-4 decision and an 8-7 decision to earn his All-American honor. Landowski finished No. 8 at the tournament.

“I feel the biggest thing that helped me be an All-American was the extra workouts I did. I like doing a lot of cardio because I feel like it helps me physically and mentally. My teammates pushing me at practice also helped me accomplish this feat,” Landowski said. 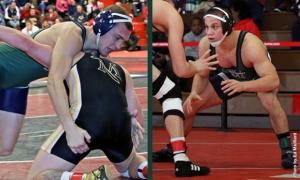 With D’Urso and Landowski winning this title, they are Mercyhurst’s wrestling program’s 24th and 25th All-Americans.

To have this honor is a great accomplishment for any team and having two wrestlers receive it in the same year shows the potential and drive that every member of the wrestling team has to succeed.

“Mercyhurst really does have a great history of success on the mats, which is even more impressive considering our program hasn’t been around for very long.”

“It’s an honor to get to be part of a group of tremendous wrestlers, and it’s definitely motivation to get my name up on our all American and national champion wall. It’s also great to get to become an AA under coach Wehler who has built this team into a national powerhouse,” D’Urso said.

“It feels really good to be a part of the line of All-Americans that this program has produced in the short amount of time it has been present.

“It is also special for me personally to be the third All-American for Mercyhurst to come out of my high school of Burrell along with Jordan and Josh Shields,” Landowski said.