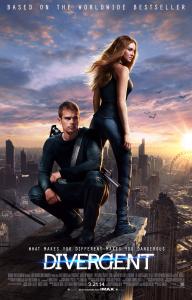 The award-winning novel, “Divergent,” written by author Veronica Roth, has finally hit the big screen much to the consternation of numerous book fans.

These divisions are designed to help keep the peace, after “the war” destroyed their world. The story follows Tris, or Beatrice, as she learns she is Divergent, or a person who doesn’t fit into any of the factions. She switches from Abnegation to Dauntless, in the hopes of protecting herself and her secret, and proving she is brave.

There, she and the other initiates must train and learn to protect the city from whatever is outside.

She must learn what it means to be Divergent before it is too late.

Viewers seemed split into two camps, those who had read the books previously to watching the movie, and those who hadn’t.

The disheartened cries of the readers could be heard nationwide.

Those who hadn’t read the book delighted in the movie’s likeable characters (including the gorgeous Four), and the fast-paced action. They seemed to enjoy the story-line, which had been dumbed down, and completely gutted for the sake of Hollywood.

While I understand the story-line needed to be changed for the sake of the movie, as happens with all books turned to movies, but there were so many facets of the story missing that it hardly seemed like the same story.

The original story was so great because the characters were so well written, which was not switched over onto the screen so well.

I mean, they could have at least tried to get people who looked like their characters.

The actors, who were oh so poorly fitted to the roles, also lacked the skills to portray the characters correctly, meaning not one of them could really act.

The only time Shaileen Woodley had any personality was at a scene were someone died.