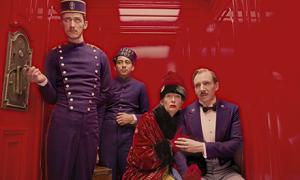 ew.com photo: Wes Anderson’s latest film, “The Grand Budapest Hotel” has a combination of action, comedy and drama that makes sure that every detail is executed to perfection.

Wes Anderson proves with every release of a new film that he is a true master of Cinema. This has not changed with his latest film, “The Grand Budapest Hotel.”

His films are instantly recognizable thanks to his perfectly manicured style, which makes every one of his films feel like a piece of art.

Something that I feel is becoming less present in modern day cinema.

The “Grand Budapest Hotel” is by far one of Wes Anderson’s best works. This movie is a wonderful combination of genres and themes, which never loses its emphasis on making sure every detail is perfect.

As they set foot on a journey to collect the inheritance from one of Gustave’s elderly mistresses.

After a few turn of events and a stolen piece of renaissance art later Gustave is framed with murder and it is up to Zero to free him.

It would be unfair to pin a single genre to this movie because it has everything action, romance and a good laugh.

All of which seems to be perfectly balanced as though each of these genres didn’t want to overstep their bounds and standout as the predominate one.

The visuals in the film are absolutely breath taking, thanks to Anderson’s meticulous emphasis to detail. The Hotel is styled in an art deco that is bursting at the seams with activity, as distinguished people exit the back of cars and a whole staff comes rushing out to begin their guests’ pampering.

The staff is dressed in vivid purple uniforms which when placed against the soft warmth of the hotel creates a beautiful palate for the eye.

One of my favorite details about this movie is Anderson’s use of different aspect ratios. The movie takes place in three different time periods.

During each time period the movie projects the aspect ratio that was the standard for the time.

For example there is a small portion of the film that takes place in the 1960s, during that time the standard Aspect Ratio was 2.35:1, which is the exact one Wes uses for those scenes.

If you want to see a true master at work, go see this film, this is by far one of Anderson’s best films.

It is able to effortlessly transition between both time periods and genres to tell a story of a lowly lobby boy and the famous Gustave H.