Bone lab to be named after Rathbun 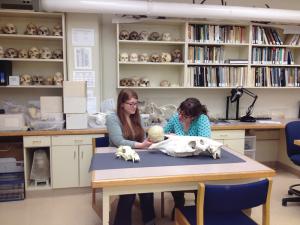 The Bone Lab in the basement of Zurn is being renamed the “Ted. A. Rathbun Osteology Laboratory” after Ted Rathbun.

Rathbun (1942-2012) was an anthropology professor at South Carolina University for 30 years. He was a board-certified forensic anthropologist among many other achievements throughout his lifetime.

He is listed in Outstanding Men and Women in Science, American Men and International Who’s Who in Asian Studies. He was a Peace Corps volunteer in Iran, a Diplomate of the American Board of Forensic Anthropology, a member of the Disaster Mortuary Operational Response Team after 9/11, consultant for Joint POW/MIA Accounting Command, assistant in identifying unknown remains in South Carolina, and winner of the T. Dale Steward Award.

According to Dirkmaat, “he was just a generally all around nice guy. He didn’t have a mean bone in his body.”

He was named as one of the Outstanding Educators of America, a well-deserved title considering the great impact he has had on all of his students.

When he retired, he gave Mercyhurst the first opportunity to purchase some of his collection of books which are now housed in the lab.

A ceremony will be held to unveil the newly named lab on May 1. Among the invited are Rathbun’s wife, Doug Ubelaker, famous physical and forensic anthropologist at the Smithsonian institution, some of his former students, and other physical anthropologists within the forensic sciences. Ubelaker will say a few words about Ted during the ceremony.