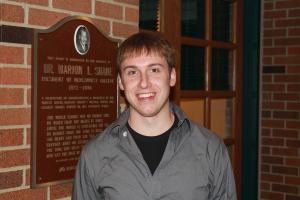 Mike Murphy photo: Latta will take over as MSG president for next academic year

As this school year comes to a close, leadership positions are being filled all over campus to prepare for the next academic year.

Electing a new executive board for Mercyhurst Student Government is no different, and this year, the student body has voted in current junior Nick Latta as its newest voice.

Currently a Resident Assistant in the Duval apartments and the former MSG vice president, Nick is no stranger to tackling large responsibilities.

As MSG president, Nick has some big shoes to fill. This academic year’s president, Amber Penna, has been working hand-in-hand with the Board of Trustees to bring about change to campus this past academic year. Besides adopting the title, Nick will also be the loudest voice of the student body.

“It is my job to survey the student body to better understand their opinions on important issues and the results of the survey are an important piece when talking to members of University Council or the Board of Trustees,” Latta says.

As next year’s president, Nick will be sitting on both the Board and the University Council, and already has ideas on new ways to change Mercyhurst for the better.

He plans on bringing the university together by increasing school spirit and student attendance at student performances, campus speakers, SAC and athletic events.

In order to implement these changes, Latta, along with the new executive board, will be working closely with the student body to ensure the changes that the student body wishes to see will be accomplished during his year as president.

Still, not all changes can happen as smoothly as they might wish.

“The most difficult part of the job will be accepting the fact that some things just cannot change over-night and having the dedication to see important projects all the way to their completion,” says Latta.

Having the motivation and dedication to continuously work toward campus improvements is important though, because making the student body happy is the key to a successful presidency.

Latta has already been hard at work preparing for next year. MSG is currently accepting applications for the 2014-2015 academic years’ spirit shirt design. Furthermore, he has already solidified the first guest speaker for the year — R.J. Mitte, one of the stars of the hit television show “Breaking Bad.”

Nick and the rest of MSG are looking forward to what next year will bring to Mercyhurst’s campus. Under the guidance of the new MSG executive board, Latta hopes to improve campus life.