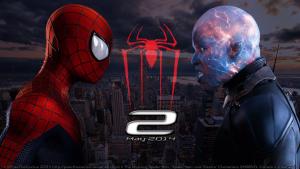 moviesofhollywood.com photo: New Amazing Spiderman 2 movie failed to be a big hit at the box offices this past weekend.

This past weekend Amazing SpiderMan 2 hit theaters in America, and personally I don’t know how I feel about the film.

Due to terrible advertising, director Mark Webb’s marketing team gave a false impression that makes it hard to like the finished piece.

According to the trailers, Gwen Stacy (Emma Stone) and Petter Parker (Andrew Gaurfeild) appeared to be trying to keep their relationship going despite her moving to a school overseas.

I thought it was creative taking a goblins greed to bring out Harry’s inner goblin.

The Harry from the original trilogy was a better pick then Dane DeHann for the role.

On the topic of costumes, it worked with the plot, impressive make on the glider.

Rhino looks like a mechanical hippo with a pointy party hat for a nose, not my top choice for a look.

In reality, the film focuses more on the cover-up of Parker’s parents’ death and a deadly disease involving the Osborn bloodline.

The second plot focus was the romance between Gwen and Peter. Finally, the third was Electro who had an estimated one-third of the film involving Jamie Foxx’s character at all.

If you don’t pay attention to what the media has posted to promote the film it is the Spiderman movie we have been waiting for.

This film, like the second film of the original Spiderman trilogy, is meant to be a steppingstone to something a lot bigger.

This movie is a good pick for a date night and for those die hard fans.

I love how Marc Webb directed the first two films, however maybe someone else should take over for the rest.

He, in my eyes, gave fans a wrong message in the trailers making it challenging to enjoy the film.

Like myself, you may have to see it twice to process the story from months of media promotions.

I give it one thumbs up and one in between, I feel they need to redeem themselves in the the next two films.