This year’s iCards are designed to reward students for getting involved. For each iCard-sponsored event students attend, they will get one hole punch in their card. After 10 events, students receive a prize and move on to the next level of rewards.

Caleb Ohmer, Vice President of MSG, noticed a problem with attendance at Mercyhurst events in recent years and he, along with President Nick Latta, felt they need to do something about it. 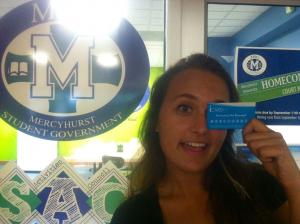 Salina Bowe photo: Mercyhurst Junior Helene Prince holds up the new MSG iCard in front of the MSG chambers. The iCard rewards students for participating in MSG events.
“Last year we saw that involvement was a big issue on campus and that was one of the concerns that students brought up,” Ohmer said.

MSG President and creator of the idea, Nick Latta, hopes this new system will raise attendance at campus events.

“It was an idea of mine to get students more involved and the best way I could think of was to reward them for it,” Latta said.

“For what is considered to be a large initiative project it, is very, very cheap,” Latta said.

Ohmer said this iCard program will turn those who do not usually attend Mercyhurst events into regulars.

“Hopefully, people will just start going because they want to go and because the events are actually fun,” Ohmer said.

Check the Weekender for this week’s iCard events.