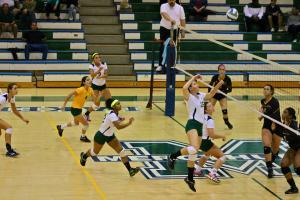 Mercyhurst’s women’s volleyball competed against West Liberty University Friday, Sept. 12. The team beat WLU 3-0 after scores of 25-7, 25-16 and a close 26-24. This victory was welcome after losing their last two games.

The first two sets were high energy and fast-paced, resulting in victory. The players worked hard and fast throughout the sets, encouraging each other and working off each other’s energy. The last set of the game ended up a little more intense.

West Liberty fought for that last game, with the score becoming tied at 20, 21, 22, 23, and 24, before the Lakers were able to push for the win at 26-24. Both teams had determination and energy which had the crowd on the edge of their seats.

The team had 42 kills overall in this game, with 17 of them coming from sophomore, Sarah Wegrzyn. Wegrzyn was a force to be reckoned with in this game, not only with the 17 kills, but also with eight digs and an overall percentage of .536.

Junior Lexi Stefanov also did well this game, with 7 kills and a .875 percentage. Stefanov said that the chemistry between team members has been difficult because they have a deep bench this year with a lot of young players, but it has been improving in practice.

Junior Kelly Vitt also said how important chemistry is during games. Vitt stressed the “fast tempo” they have been trying to keep, and that it is the key to playing a successful game of volleyball.

Coach Ryan Patton also emphasized the importance of moving faster than the other team can keep up with. “I think they handled it well,” he said, and was also very happy with the direction that the team is moving in. The positive energy between players was a big part of their success this weekend.