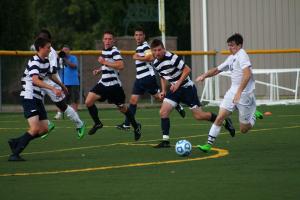 Senior forward Patrick Gehring takes control of the ball during the Lakers 3-1 win over Alderson Broaddus. The Lakers will be p: Salina Bowe

Coming off a recent loss, the Mercyhurst men’s soccer found the fire needed to beat Alderson Broaddus, 3-1, Tuesday at home.

Mercyhurst quickly got into the game with a shot by senior Ryan Lund at 3:26, only to be saved by the Battlers’ goalie, Ricard Lao. The Lakers kept their momentum with two close shots by sophomore Danny Deakin.

After two more attempted shots, junior Richard Vanhorne received a pass from the left side to the center, beating the goalie and scoring the Lakers’ first goal of the game. Two more shots came closely after by senior, Fernando Martinez, and Deakin, respectively.

The Battlers finally gave a showing about 4 minutes left in the first half. Marco Profumo took a shot at 41:43. Ron McKelvey ended the run with a wide shot to the goal.
Mercyhurst brought it back with two shots by red shirt sophomore Jack Watson, and sophomore Michael Dirienzo.

The momentum created in the first half carried through to the second half. Only about three minutes in, Mercyhurst’s grad student Gregory John Andrews scored his first goal of the season with a pass from Martinez.

At just under 20 minutes in to the second half, Mercyhurst took advantage of a rebound off the goalie. Watson also scored his first goal of the season with the help of Deakin and Martinez.

Mercyhurst continued their campaign with three more shots before the Battlers took back possession. With only three minutes left in the game, Zach Partyka capitalized on a pass from Ryan Hughes to give Alderson Broaddus their first goal of the game. Mercyhurst kept the ball until the final whistle.

The Lakers will be back at home Sept. 19 with a 3:30 p.m. game against West Chester University.