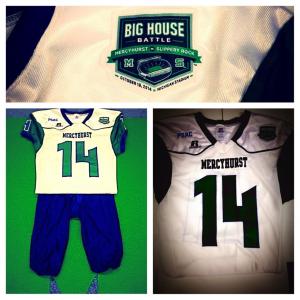 The Mercyhurst football team will travel to Ann Arbor, Michigan to play in the Big House Battle against Slippery Rock on Saturday, Oct. 17, at 1:00 p.m.

Saturday marks the 35th anniversary of Slippery Rock’s first visit to the Big House in 1979. It is also the third game Slippery Rock will have played here.

For decades, Slippery Rock football scores have been announced during Michigan home games. Because of this relationship and tradition, Mercyhurst has an opportunity to get their first expirience playing in Michigan’s stadium.

Also traveling to Michigan for the game is the Mercyhurst band, Cheerleading squad and many fans.

Both teams hope to break the record for biggest crowd at a Divison II football game. This record is held by Slippery Rock and Shippensburg with an attendance of 61,143 fans.

Prior to the start of the game Mercyhurst will hold an alumni and friends tailgate from 10:30 a.m. until 12:30 a.m.

For this game, Mercyhurst will be wearing different uniforms that are specialized for this game.

These uniforms have the “Big House Battle” logo on the left shoulder of their jerseys.