While the 300 freshmen living in Warde Hall rave about their brand new housing, a group of frustrated students living in apartments on upper Briggs and Lewis Avenues met with college administrators last week to discuss the worsening conditions in their apartments.

Junior Rachel Kandefer and her roommates were shocked when they moved into 3938 Lewis, which students say is one of the worst apartment buildings on campus.

At least two people are required to open and close the windows, which shower the room with paint chips and parts of the crumbling foundation. The women in this apartment had to nail the window in the bathroom shut and cover the clear glass with shelving paper to ensure privacy.

Kandefer’s apartment has a recurring ant infestation, while her ground floor neighbors are plagued by spiders.

Men living on the top floor report waking up with sore nostrils from breathing the mold all night.

These problems are common in the four buildings at the top of Briggs and Lewis known on campus as “Highland Square.”

According to Tobin, improving conditions in these buildings is one of the college’s highest priorities.

“At this point we are seriously looking at what kind of life we have left in those buildings,” Tobin said. “Are the buildings worth the investment to get them up to par, or do we look at a new phase of building new student housing?”

The buildings were constructed in the years immediately after World War II.

The college is currently engaged in a study to determine the feasibility of replacing the four buildings at the top of Briggs and Lewis. Tobin hopes to have results from the study within 90 days.

However exciting these plans may be for the rest of the campus, it doesn’t fix the situation for students living in the buildings now.

“When I first moved in I was like, ‘Well, this is college housing, everyone is probably living like this.’ Then I went one building down on Lewis and I thought it was glorious,” Kandefer said.

So far, approximately 165 students have signed the petition urging the administration to take action about conditions.

Tobin said he’s concerned about the situation, but noted the college’s reluctance to do expensive window replacement on these aging buildings.

“You don’t want to put a lot of money into a temporary fix. What we have to decide is how long is temporary,” Tobin said.

Students living on the first and second floors of these buildings see the windows as a severe safety risk.

Earlier this month, a drunk man pushed a window open and attempted to come into Kandefer’s apartment while she and her roommate were inside. Police and Safety Chief Ken Sidun did not wish to comment on the safety of the apartments.

Maintenance recently did an inventory of first and second floor apartment windows, addressed problem locks and now report that all windows will lock. Yet some apartment windows in “Highland Square” can only be locked with the help of maintenance workers.

In some apartments, the moisture and condensation seeping through the windows causes potentially unhealthy mold to overtake large parts of the ceilings and walls. 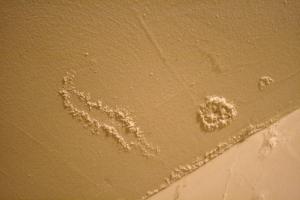 Ethan Magoc photo: Mold creeps up a ceiling in an apartment at 3938 Lewis. Maintenance workers painted over the mold last week to try to give a quick fix to a more serious problem.

“It used to be worse. Maintenance came in and Spackled it a little bit, but they told us it’ll fall out soon. They were confused why they were having them do it,” junior Maddie Baker said.

“We’re working toward a solution,” Tobin said. “The difficulty is (that) it’s not going to be a solution that happens in a week.”

Kandefer hopes Mercyhurst College President Dr. Tom Gamble, Tobin and other members of the administration will join her on an upcoming tour of the worst apartments on campus.