‘Come to the Cabaret,’ and they did 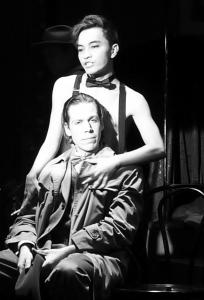 In the opening scene of “Cabaret,” the Emcee (Nam Nguyen) declares, “Leave your troubles at the door!”

This sardonic, burlesque-style musical embodies the escapism of the 1930s.

The Emcee and his ‘Kit Kat Girls’ were fabulously raunchy and set the darkly provocative tone for the rest of the show.

Set in Nazi Germany in 1931, “Cabaret” expresses the performative nature of people during extreme hardship and the temporary escape that show business offers.

Brett Johnson, Ph.D., so brilliantly brought the Kit-Kat Club to the audience by transforming Taylor Little Theatre into a night club with table seating and a full bar.

Johnson’s approach to theater creates an atmosphere, not just a show.

The moment the audience stepped into the room, they were pulled into the world of “Cabaret.”

He soon meets the unforgettable Sally Bowles (Sarah Creighton), who upon being fired from the Kit Kat Club, moves in with Cliff.

When Sally becomes pregnant, the two settle into a relationship that is textured with love, dependence, immaturity, and finding comfort in not being alone.

Though dysfunctional, Sally and Cliff begin to embody a slightly warped American dream.

Creighton owned the stage in her fabulous embodiment as both the comedic and tragic center of the show.

Songs such as “Maybe This Time” and “Cabaret” were windows into Sally’s soul that revealed the depth beneath her carefree façade.

The sub plot follows the life of Fraulein Schneider (Tonya Lenhart), the landlord of the boarding house that falls in love with Herr Schultz (Grant Clark).

The play takes a dark turn when it is revealed that Herr Schultz is a Jew.

Suddenly, the political oppressions of the time-period give a dark, cynical tone to the carefree atmosphere of the Kit Kat Club.

His attention to detail regarding staging, transitions, set, lighting, and costumes fed into a cohesive production in which everything existed within the context of the musical.

At the end of the show, the Emcee stood before a backdrop of black and white footage of Nazi Germany.

The actors did not take bows, which left the audience in a reflective silence that was more powerful than any standing ovation.

Bravo to the actors and crew for creating a meaningful, thought-provoking production.

Their interpretation of “Cabaret” held a critical mirror up to the audience through an entertaining, and sardonically funny production.

Mercyhurst Theatre Department’s next production will be a performance of William Shakespeare’s “The Tempest,” Dec. 4-6, at 8 p.m. and Dec. 7 at 2 p.m.

You will not want to miss it!