‘Fury,’ more than a war movie 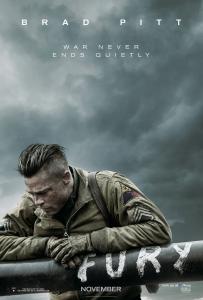 The film “Fury” is an October must-see movie.

It follows five brave men, on a mission where they are horrendously out-manned, to over-power Nazi soldiers.

Set in April 1945, the last month of warring in the European Theater, Allied forces make a final push into Nazi Germany.

After a loss of one of their own, Wardaddy takes on a rookie, Norman Ellison, showing him that, “Ideals are peaceful. History is violent.”

While the trailers are eye-catching, the film is beyond jaw-dropping.

The storyline goes far beyond the commonly used battle and killing style of most war movies.

It takes the audience behind the platoon’s views of the war, as well as the people trying to survive in enemy borders.

On the down side, despite its amazing explosive effects, the film’s special effects on the bullets look similar to that of the Star Wars blaster fire effects.

On the upside, I applaud the director for going out of his way with this film.

The final stand at the end of the film is a scene so mind-blowing only a brilliant mind could not only create it, but successfully carry it out to the big screen.

Overall it makes my list as one of the top three war films with “Saving Private Ryan” and “Lone Survivor.”

Any history buff or movie fan will enjoy this film.

“Fury” is directed by David Ayer.