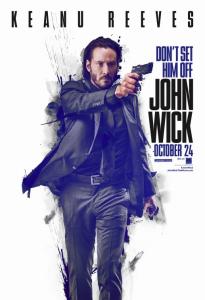 The words “revenge movie” used to have a larger resonation, but the pure revenge flick has found itself on the endangered species list for the last 15 years.

Revenge movies are based on the idea that the protagonist has nothing to lose, and nothing to live for: except to kill everyone who has wronged them.

There is no saving someone, there is only retribution, typically in a very violent means.

There have been a scattering of entries into the genre in the 2000s (the best being the 2007 movie “Death Sentence” starring Kevin Bacon) but nothing good has come out in the box offices recently.

The good thing about reviewing a revenge movie is that it almost writes itself.

John Wick (Reeves) loses his wife to a terminal illness and then loses his dog to a bunch of thugs who steal his prized Mustang.

Once a guy loses his wife, his dog and his car, he is either the subject of a country song or he is perfectly placed to live solely for revenge.

There are plenty of things to like about “John Wick.”

Primarily, it knows what it is and it spends the whole movie delivering on its premise.

The screenwriters kept the script taut and lean (the movie clocks in at 107 minutes) and kept dialogue to a minimum.

There is enough dark humor scattered throughout and the action rarely takes a hiatus.

There is also some originality in the script.

The use of a hotel safe house and a whole new meaning to the term “industrial cleaning” are particularly entertaining in the film.

While there are plenty of cliché moments, such as bad guys talking too much, the movie actually is in on the joke most of the time, which adds to the level of entertainment for the viewer.

It is refreshing to see a movie that knows what it is and does not try to be anything else.

If you want some great action set pieces, dark humor and a movie that delivers on what it promises (revenge!) then I would highly recommend “John Wick.”