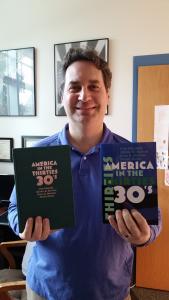 “America in the Thirties” focuses on larger trends and historical events in the 1930s, including the effects of Great Depression as well as the Dust Bowl.

Each professor wrote about their own point of view along with collaborating on certain subjects.

The idea of writing a new textbook came from the professors’ struggle to locate a suitable textbook for the course, or one that showcased the era from different perspectives.

The professors found a decade series that Syracuse University published. However, the series was missing the 1930s. Sullivan, a professor in the English department, emailed the publisher, Ben Green, and he replied, wanting them to write the missing book.

With information about the series, they drafted an outline of the chapters and began writing. Each professor wrote about their own perspective of the 1930s, except for the African American chapter which they collaborated on together.

At the end, the professors came together again to review the book to mold it into sounding like one consistent voice instead of four different ones.

The process took two years to complete, which Sullivan and Sheridan said was longer than it should have been.

Many issues, including the core revision, delayed it. But according to Sullivan, “the final product was worth the wait.”

Sullivan said she borrowed over 100 books during the writing process. Her own perspective of the 1930s is social.

Sullivan wrote about how individuals and small groups came together to change society. She also included how women, like environmentalist Rachel Carson, and students impacted the decade.

“[The 1930s] is the story of every kind of underdog there was,” Sullivan said.

Originally, Sullivan was not interested in the 1930s. Sheridan asked her to be a part of the IDST’s teaching staff its first year, five years ago. She said her love for the decade came out of research for the class and grew over time.

Sheridan, an instructor in the Communications department, focused his section on the communication aspects of the decade, such as President Franklin D. Roosevelt’s fireside chats.

Sheridan’s interest in the 1930s derived from watching movies from that period, which is also when a lot of his favorite movies were made.Many of the films depicted elegance and style, an aspect that Sheridan said he liked.

Media, overall, had a positive impact on people during the depression.

“Everything could have been gloom, but movies and radio lifted spirits,” Sheridan said.

Each professor also had their own writing process. Sullivan said she had to isolate herself from distractions to write her chapters.

Writing this textbook has given Sullivan new opportunities. She said that she is presenting at a conference on the book “Candy” written by L.M. Alexander.

“There is a more positive representation of African Americans in the novel—especially the illustrations by Rockwell Kent—than most mainstream images of the time,” Sullivan said.

The most important take-away from the experience of writing and publishing the textbook, Sullivan said, is that creating the book was gratifying work. She emphasized the idea that there are connections between the classroom and the real-world.

“Learning how to think in an organized systematic way is key for success in life,” she said.