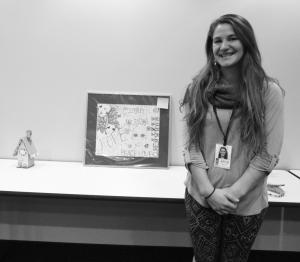 Sami Rapp photo: Jena Skelton, junior Art Therapy major, sets up for the art gallery at the Regional Cancer Center, Erie. Next to her is a piece of art done by one of the center’s patient’s granddaughters.
Some students at are able to turn their passion into experience during their time at Mercyhurst.

This past Tuesday, Nov. 4, junior Art Therapy major Jena Skelton did just that as she organized an art gallery to showcase the creative works of patients she worked with during her time as an intern and employee at The Regional Cancer Center, Erie.

The event featured the art of 16 different patients and had over 20 original pieces on display. Over 50 people were in attendance for the gallery, which ran from 5 p.m. to 7 p.m.
Skelton was inspired to put together the gallery after teaching a class called “From the Heart.”

“I was taken away by how they all interacted and became a group. [The idea] just kind of sprouted this idea to keep this going,” Skelton said.

Skelton began her internship at the Regional Cancer Center in February 2014, after personally calling the Center and asking if they would allow her to come in and intern there. The internship eventually evolved into a job.

The Regional Cancer Center, Erie, did not even have a registered art therapist on staff, so Jena would be pioneering the way.

Because she is not a certified Art Therapist, Skelton practices “art for healing” with adult cancer patients, working one-on-one and in groups.

“I enjoy the variety, because everyone is different,” Skelton said of the working at the Cancer Center. “When I am here, I know this is my job and I know this is my place, and I just morph into that position and it works for me,” she said.

Skelton said her proudest moment at the Center came when working with the “Thrivers Group,” a support group in the hospital made up of terminally ill patients, and helping to create an environment where people could open up and talk about their feelings and fears.

“A lot of times people act like the patients have already died, and they have not,” said Skelton. The patients “can still start new things,” she said, adding that she focused the group on starting entirely new projects that they could get excited about and grow from.

Skelton said the experience of pursuing her work with the Cancer Center and organizing the gallery of patient’s art has taught her the importance of taking chances.

“I think taking chances is hard for me, and this is one that has turned out so positive…” said Skelton. “It all starts with one idea and one chance. No idea is stupid.”

“I love what I do, and I definitely know that from this experience…You have to find your place, and I think I have found that here.”

Skelton plans to teach an Art Journaling class at the Regional Cancer Center in February 2015. After graduating in the spring, Jena has plans to go to graduate school to become a registered Art Therapist. She hopes to travel and do art therapy internationally.