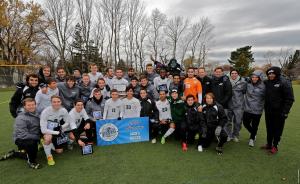 This is the second time the team has won the conference championship in three seasons. This win improved the Lakers’ record to 18-2.

Last season, the Lakers lost in overtime 3-2 in the final game, so many of the men were eager to claim the title back this year.

After winning Friday’s semifinal game against West Chester 2-1, the team had a drive to finish their PSAC season strong.

“Our preparation for the games this weekend was just like any other game we play. We never underestimate our opponents. We knew it was a knockout tournament so we just had to win,” redshirt sophomore Jack Watson said.

At Saturday’s game, Watson started the scoring for the game in the 20th minute off an assist from senior Ryan Lund.

Again at the 37th minute, Watson scored another goal from senior Dane Rimko to take the game to the half with the Lakers leading 2-0.

“It was a relief to be up 2-0 at the half because it took us 88 minutes to finally score in the game before on Friday,” Watson said.

“To come out strong and score two goals was good for us because we knew once we were disciplined in the second half there was no way Bloomsburg could break our defense down. Our defense has been so strong all year and don’t get enough credit for what they do.”

The third goal for the Lakers was made by junior Sten Marcson. This was his second goal of the season.

Senior Fernando Martinez scored the next goal off of an assist from sophomore Danny Deakin.

Deakin recorded another assist to junior Richard Vanhorne who increased the score to 5-0 Lakers and took them to the final.

Sophomore goalkeeper Nicholas Smith made four saves during the game and received his second shutout.

Following the game, Watson was named tournament Most Valuable Player (MVP). He had three goals over the two games this weekend. He now sits at 22 goals on the year which leads the nation.

“It’s great to be scoring goals because that is my job, but I wouldn’t be able to do that without the team. Again, the defense doesn’t get enough credit for what they do. They’re coming together and blending nicely and are very hard to break down. You need a strong defense to be successful. Offenses win games but defenses win championships for you,” Watson said.

The Lakers will play next in the National Collegiate Athletic Association (NCAA) Tournament. Mercyhurst will play Notre Dame College of Ohio at Mercyhurst soccer field on Sunday, Nov. 16.