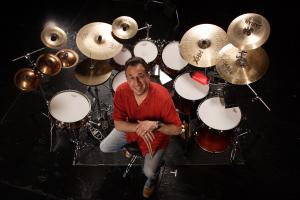 Contributed photoThis Saturday, the Mary D’Angelo Performing Arts Center will be playing host to a leader of the Latin American music scene.

Lauded for his “futuristic approach to the Latin jazz big band canon” by The New York Times, and for the “high energy” suffusing his tracks, audience members are surely in for a treat when Bobby Sanabria and ¡Quarteto Aché! take the stage.

Bobby Sanabria is heralded for his many talents as a drummer, percussionist, composer, arranger, recording artist, producer and educator. He has also received multiple Grammy nominations.

Sanabria was born to Puerto Rican parents and raised in the South Bronx of New York City. Deciding that he wanted to “get serious” with his music, he attended the Berkley College of Music in Boston from 1975 to 1979.

Along with obtaining a Bachelor of Music degree, he also received Berkley’s prestigious Faculty Association Award for his work as an instrumentalist.

In 2002, Sanabria released his ¡Quarteto Aché! recording; it is said to “document his virtuosity in a small group setting.” The recording itself was acclaimed as a “classic” by Modern Drummer magazine and critically acclaimed by The New York Times. It was also nominated for Best Latin Jazz recording of 2003 by the Jazz Journalists Association.

In 2006, Sanabria was inducted into the Bronx Walk of Fame by having a permanent street named after him on the Bronx’s famed Grand Concourse in recognition for his contributions to music and the arts. It is recognized by the Bronx Borough president as the highest honor a person from the Bronx can achieve.

Sanabria and his ¡Quarteto Aché! toured Armenia this past June, being personally invited by the U.S. Embassy to represent the U.S. in a series of concerts. The group received an ovation from the estimated 8,000-person audience.

When asked what jazz represents to him, Sanabria simply replied, “Freedom.”

Ben Ratliff of The New York Times says, “Mr. Sanabria expands the possibilities, moving the sound of bands like that of Puente and Machito, with all the heft and intricacy and clave-based dance rhythm, into the harmonically oriented sophistication of current New York jazz players.”

Presented through JazzErie, the performance will take place in the Walker Recital Hall on Saturday at 8 p.m. Tickets are $5 with Mercyhurst student ID.

Sanabria will also hold a clinic open to students and the general public on Friday, in the Walker Recital Hall at 8 p.m.