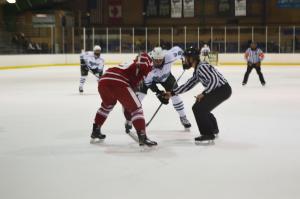 Mercyhurst swept Sacred Heart University, 7-2 and 4-2, over the weekend of Jan. 9 and 10. The Lakers are now tied with Canisius: Casey Bleuel

Since Nov. 22 the Mercyhurst men’s hockey team has gone 7-2-3 in 12 games, improving their record to 12-7-3. Nine of these games were played at home and three away.

They started off playing away at Canisius on Nov. 22, where freshman goaltender Brandon Wildung recorded his first collegiate start with a 3-3 tie.

Also during the game, senior Daniel Bahntge recorded his 100th point and became the 19th member of Mercyhurst’s 100 point club. He is the third player this season to join the club.

The team then traveled to West Point, N.Y., and swept Army on Dec. 5 and 6 in a two-game series.

Although red shirt freshman Jack Riley’s father is the head coach for Army, he didn’t hold anything back during the weekend as he recorded two goals and two assists during the game on Saturday night.

On Dec. 13 and 14, the Lakers hosted 17th-ranked Robert Morris and split the weekend.

Mercyhurst hosted Ohio State in the first ever SnowTown ThrowDown at the Erie Insurance Arena in downtown Erie on Jan. 2 and 3.

They recorded a loss and a tie during the weekend.

The Lakers came back to the Mercyhurst Ice Center and swept Sacred Heart on Jan. 9 and 10.

Freshman Tyler Enns recorded his first goal during the sweep and Bahntge recorded his career-high five point night and two points on Friday, capping off a weekend that led the nation in points.

Over the weekend, the Lakers hosted and swept Holy Cross.

Sophomore Spencer Bacon started in goal during the game on Friday, Jan. 16, and saved 31 out of 32 shots on goal for a Laker 2-1 win.

During Saturday’s game senior Tyler Shiplo scored in overtime to give Mercyhurst a 5-4 win.This was his second goal of the game.

The Lakers will travel to Milford, Conn., for their next game against Sacred Heart on Jan. 23 and 24. Both games start at 7:05 p.m.