For the past 26 years, Greg Rasmussen, Ph.D., has dedicated his career to the conservation of the African Painted Dog. 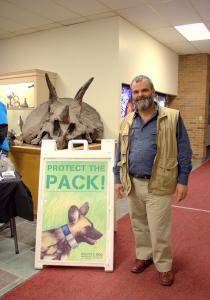 Nhi Tran photo: Greg Rasmussen, Ph.D., stands by a sign for his Protect the Pack Initiative after speaking with students and faculty about African Painted Dog Conservation on Friday, Feb. 6.
On Feb. 6, in an event sponsored by Mercyhurst’s Biology and Education departments along with the Erie Zoo, Rasmussen shared his research and experiences with the Painted Dog to a crowded Zurn 114 lecture hall.

With a bushy beard, a tan, wrinkled vest-jacket and dark eyes that lit up with excitement when talking about the habits of the Painted Dog, Rasmussen seemed to have all the qualities one might imagine of a man who has dedicated his life to the conservation of wildlife.

According to Rasmussen, there are currently 4,000 to 6,000 African Painted Dogs in the wild, a number which has increased in recent years, but not enough to take them off of the list of endangered species.

“Ultimately, we all know that our wildlife is shrinking,” said Rasmussen. “Habitats are declining. But together if we want to make something happen, we can.”

Rasmussen hails from Zimbabwe in the south of Africa where he works at the Hwange National Park. He is currently touring zoos and schools in the United States to raise funds and awareness for conservation, as well as educational projects in Victoria Falls, Zimbabwe.

He spoke about the prejudice that surrounded the Painted Dog, which had often been depicted as a dangerously vicious carnivore, and ultimately played a role in the wide-spread slaughtering of the animal by ranchers in Africa.

“It’s important to look at history before you start to move forward,” said Rasmussen. “Know what’s on. It’s the same with a person. If you don’t know their history, you’re never going to understand them.”

Rasmussen went to great lengths to understand the Painted Dog, including following and living closely with packs for three years at a time.

“I took pack of dogs and I studied the hell out of them. Wherever they went, I went,” Rasmussen said.

Despite his 26 years of familiarization with the species, Rasmussen continues to be surprised by the uniqueness of the Painted Dog.

“I’m still learning things. It’s like pulling the slot machine. I get my rewards when I learn something new, or something new happens,” Rasmussen said.
What Rasmussen learned during his intense study of the social life of Painted Dogs drew several sighs from the audience.

Roaming in packs that range from five to 20, painted dogs are one of the few species where there is no fighting, according to Rasmussen. The dogs are able to do this by practicing what Rasmussen has labeled “Preemptive Conflict Resolution.” They accomplish this by noisily greeting one another individually each morning.

Painted Dog packs have one alpha pair, as opposed to a dominant pair to rule the pack, according to Rasmussen. They choose their leaders democratically when they are pups.

“We’re smart,” said Rasmussen. “We steal lots of ideas from nature, and we should keep stealing them, because nature has got a lot to offer us.”

The pack likewise dedicates its time and energy toward working together to protect and raise its pups, and look out for one another when sick.

“They care for each other deeply,” Rasmussen said of the dogs’ dedication to one another. “They are probably one of the most impressive social animals.”

Rasmussen and his foundations, the Painted Dog Conservation (PDC) and the Painted Dog Research Trust (PDRT), are currently working on a solution to deaths caused by set snares that the dogs get caught in, which wrap around their necks. He is in the test period of a metal collar designed to prevent cuts and strangulation.

Rasmussen was also raising funds for a Children’s Bush Camp to teach primary schools to focus on conservation.

“Good conservation is not learned in cities, it’s learned in the field,” Rasmussen said.