A former ski-instructor, actress and advertiser – Betsy Frank now serves as Administrative Assistant to the Office of the President at Mercyhurst University.

Frank stressed the diverse and always changing roles in her position. 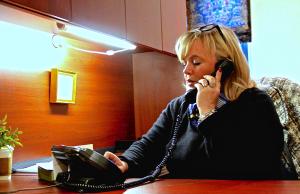 Nhi Tran photo: Mercyhurst alumnus Betsy Frank serves as Administrative Assistant to the Office of the President.
“That’s what I love about it – the diversity – I wear a lot of hats,” Frank said.

Born and raised in Erie, Frank graduated from Mercyhurst in 1981 with a degree in theater which lead her to New York City and all over the world.

After a challenging career as an actress, Frank decided to take what she referred to as “a leap of faith,” and spent the next 17 years in advertising. In 2007, she found herself back at Mercyhurst, returning to the school as a member of Human Resources.

“Working in Human Resources was a nice transition to working in the Office of the President,” Frank said with a smile.

As Administrative Assistant to the President, Frank interacts with a lot of different people, including students, faculty and dignitaries.

Mercyhurst University President Tom Gamble, Ph.D., noted the importance of the work Frank does at Mercyhurst in an email to The Merciad
“She is vital to the office, and while Betsy has the lighthearted demeanor that allows her to make it look easy, her job is very challenging to say the least,” said Gamble. “Needless to say I am very grateful to have her in her role and Mercyhurst benefits greatly having this competent alum in the Office of the President.”

The university itself is near and dear to Frank. She pointed to Mercyhurst tradition as one of the many reasons for her love of the school.

“I come from a long line of women who graduated from Mercyhurst; my cousins, all girls. No matter how much [Mercyhurst] changes the spirit stay the same.”

Her son, Thomas Frank, is also an alumnus of the Intelligence Studies program.

Frank said the new president should be “charismatic, compassionate, merciful and multifaceted.”

She said the qualities of the new president should not be limited to one specific trait.

“It has to be a combination,” Frank said.

Frank said students should make the most of their time while at Mercyhurst and focus on the legacy of their work.

“I would like to tell the students to take pride in their work and in themselves. The footprints you leave now will follow you to the future so be true to yourself and put your nose to the grindstone – and also, have a little fun.”