Magoc received the honor for his article “Reflections on the Public Interpretation of Regional Environmental History in Western Pennsylvania,” initially written and presented at a conference early in 2014. 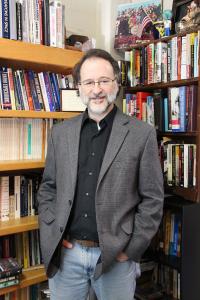 Nhi Tran photo: History Department Chair Chris Magoc, Ph.D., was honored by the National Council on Public History for an article concerning the treatment of environmental history in Western Pennsylvania regions.
Magoc earned the distinction of “honorable mention” for the G. Wesley Johnson Award, which is presented for the best articles published in The Public Historian in 2014.

“I hadn’t written an article in 20 years,” said Magoc, but added that writing the article was a good experience, as he was excited to have the opportunity to address a larger audience.

The article takes a critical look at the presentation of environmental history in several areas in the western Pennsylvania region, including Erie, Forest County, Oil City/Titusville and Donora, south of Pittsburgh. The article claims that museums often attempt to only tell a positive story about their environmental histories.

In the case of Oil City in Venango County, state facility Drake Oil Well, pushed back against an early draft of Magoc’s article, asking that several lines on fracking be removed.

“Most museums don’t tie past environmental contamination to the present worries people have,” Magoc said. Museums are hesitant to address the implications of certain historical events and end up presenting what Magoc referred to as a “circumscribed discussion.”

Part of the goal of the article, according to Magoc, is to get history out of museums and into the community.

The article went through 15 drafts before finally being published last year.

“When I was finished, I just thought ‘this might be pretty good stuff,’” Magoc said.

While environmental issues have always been at the heart of Magoc’s Public History career, crafting the article was difficult, he said.

“It becomes an ethical challenge,” said Magoc. “Do I ignore certain things or tackle them? To what extent are Public Historians able to insulate themselves? We are to be fair and objective, telling an honest story, but we’re also serving a client.”

Magoc and several colleagues are currently working on another oral history project which will lead to a walking tour around part of Erie. According to Magoc, projects such as this are vital to keeping history accurate and in the public sphere.

Magoc is currently working on his seventh book, having just finished an encyclopedia on the 20th century.