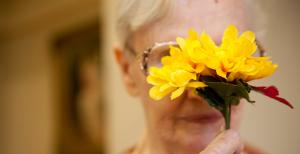 The film “Still Dreaming” will be playing at Taylor Little Theatre.: miac photo

If you are an avid fan of Mercyhurst’s Sunday afternoon movies, then prepare for something quite different this weekend.

The film being shown is called “Still Dreaming.”

The film follows a group of elderly living at the Lillian Booth Actors Home in New Jersey and a pair of young directors, hired to stage an in-house performance of “A Midsummer Night’s Dream.”

The elderly people who serve as the actors in the play were once widely celebrated for their talent as actors, performers and musicians on Broadway, now struggle with Alzheimer’s, dementia and physical disabilities.

As the rehearsal process unfolds, the actors find themselves experiencing the pain and exhilaration of re-immersion in their life’s work amidst the trials of old age.

At the same time, the troupe’s young co-directors, Ben Steinfeld and Noah Brody of NYC’s celebrated Fiasco Theater, struggle to maintain forward momentum with this over-80 acting ensemble.

As the troupe pushes forward, the play’s themes of perception, reality vs. dreaming and memory become relevant in sharp relief.

Ultimately, the performance turns out to be surprising, mysterious and resonant, and a vital reminder of the value of engaging our dreams no matter our age.

With praises from Variety Magazine and Academy Award-nominated actress June Squibb, “Still Dreaming” has gone on to touch the hearts of all who have viewed it and ignite the passion of theatre in those who have lost it.

This inspiring film will be shown at Taylor Little Theatre on Sunday, March 1, at 2 p.m.