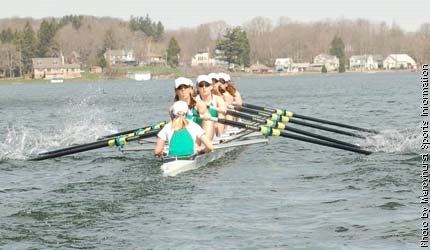 Three gold medals came home with the Mercyhurst College men’s and women’s rowing teams from Dad Vails this weekend, the most ever claimed by Mercyhurst crews in the history of the program.

The regatta was the men’s equivalent to a championship, because they are not included in the NCAA.

"It’s one of those days where you want everything to slow down, because you don’t get too many of these in your life," head coach Adrain Spracklen said.

Due to weather conditions, the order of events was reversed, causing the Mercyhurst victories to begin when the women’s varsity eight avenged last week’s loss to Grand Valley State University (GVSU).

They entered Saturday’s final in first after an inspiring time trial and repeated the results when junior Leah Niecgorski set the rate to nudge ahead of GVSU by just three seconds with a time of 6:50.200.

The women’s four barely missed out on a spot in the finals by less than one second when they caught third in the semis.

Next came the men’s lightweight four, which defended their unbeaten status when they snatched gold in the event for the second straight year.

They had a decisive five-second lead over Berkley at 6:45.004 and crushed Brock University, Drexel University, Emory University and Saint Joseph University along the way.

Three of this crew’s members were in last year’s winning four as well and will likely continue on to compete overseas at the Henley Royal Regatta in July.

In the pair event, Stanislov Kostic and Michael Orzolek claimed the third and final gold of the day.

Kostic, who was the fourth member of last year’s light four, and Orzolek, who took silver in this event last year, synchronized their skills to finish at 7:21.320

Now the women will await their bid to the NCAA championship, held in Camden, N.J. from May 30-June 1.