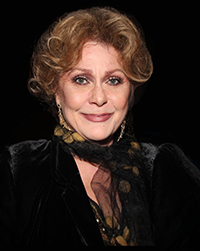 Actress Elizabeth Ashley will speeak about her 50 year career, among other things, in the PAC on March 26 at 8 p.m.: mercyhurst.edu photo

This Thursday night, Mercyhurst University will welcome Tony Award-winning actress Elizabeth Ashley for an onstage conversation about her legendary career.

The Mercyhurst Theatre Program, with support from the Mercyhurst Literary Festival, the Mercyhurst Office of Academic Affairs, Erie Arts & Culture and the Greater Erie Alliance for Equality will present “An Evening with Elizabeth Ashley” on Thursday, March 26, at 8 p.m. at Taylor Little Theatre.

An accomplished stage actress of more than 50 years known for her strong and vibrant performances, Ashley, 75, made her Broadway debut in 1959 in Dore Shary’s play “The Highest Tree.”

Since then, she has appeared in over a dozen Broadway productions.

She won a Tony Award in 1962 for her portrayal of Mollie in “Take Her, She’s Mine,” and received Tony nominations for “Barefoot in the Park” in 1963 and the 1974 revival of “Cat on a Hot Tin Roof,” for which she also received the Tennessee Williams Foundation Award.

Ashley most recently starred in the Broadway revival of “You Can’t Take It With You,” opposite actor James Earl Jones.

Ashley is best known for being one of the definitive interpreters of Tennesse Williams’ work, which will be the one the main topics of discussion during the event, as well as her association with playwright Tennessee Williams and her brilliant portrayal of Maggie in the play “Cat on a Hot Tin Roof.”

She also has become one of the founding members of the Board of Directors of the American Film Institue, served on the First National Council of the Arts and served on the President’s Committee for the Kennedy Center Lifetime Achievement Awards.

Her visit also happens to be around the time in which the Mercyhurst Theatre Department will be presenting Williams’ final play, “Clothes for a Summer Hotel.”

Brett D. Johnson, Ph.D., will be leading the talk onstage in the style of “Inside the Actor’s Studio,” and Ashley has also agreed to perform a monologue from Williams’ play “Sweet Bird of Youth” as part of the event.

Johnson commented that he has wanted to bring Elizabeth Ashley in to speak to the students on campus ever since meeting and working with her in 2011 during a three-day conference at the University of Missouri, where she and Edward Albee were guest artists.

“She is a Broadway legend, has a career spanning five decades, and has worked with everyone from Neil Simon to Edward Albee.

Simon even wrote the part of Cora in “Barefoot in the Park” for her, and she acted opposite Robert Redford in a production directed by Mike Nichols.

I wanted to provide that opportunity for our students, faculty, staff, and administrators, as well as the greater Erie community, to hear from one of the greats,” Johnson stated.

The event is free and open to the public, and will take place Thursday night, March 26, at 8 p.m. in Taylor Little Theatre.

The talk is free and open to the public.