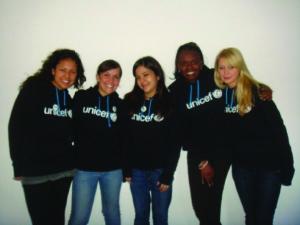 Senior Marta Baran, a hospitality management major, was one of five students across the United States chosen to assume a leadership position with the Campus Initiative Council of UNICEF for 2009-2010.

Baran’s experience as an international student from Poland at Mercyhurst will bring a perspective of diversity to UNICEF’s mission.

Baran’s passion for helping children helped her find the college’s UNICEF chapter. With her new position she will be able to further promote her beliefs in the UNICEF initiative.

The UNICEF Campus Initiative is a grassroots movement that promotes the belief that college students can make a difference in helping to improve the lives of children around the world. In Baran will work in the areas of education, advocacy and fundraising activities that benefit UNICEF. This initiative includes organizing concerts, promoting UNICEF on campus and participating in UNICEF activities such as “Trick-or-Treat.”

Baran first became interested in UNICEF after volunteering at an orphanage in her home of Lublin, which opened her eyes to some of the conditions children are in.

“Imagine that 20 percent of the world’s population, which is about 1.3 billion people, live on less than a dollar per day, or the fact that pneumonia takes the lives of about two million children each year – more than AIDS, malaria and measles combined – or that 24,000 children die every day from causes that are preventable,” Baran said.

She said she got involved with UNICEF because of its significant impact on the improvement of the lives of children. Because of her consistent and international involvement with this organization, Baran was invited to attend the national conference and was encouraged to put in an application for the National Council.

Baran’s application was accepted, and during her training, which took place Oct. 2-4 in New York City, she gained a better understanding of UNICEF and learned how to fully comprehend her role in the scope of the Campus Initiative National Council. They also built collective and individual work plans for this year and created a system of communication between UNICEF leaders.

Twice a month, Baran engages in conference calls with other National Council Members and UNICEF headquarters in order to communicate the development of UNICEF’s goals.

For the future, Baran said she “would love to see ‘The US Fund for UNICEF Campus Initiative’ to be well-known on college campuses as an effective agent of major difference in children’s lives.”

UNICEF-MC Club is celebrating the 20th Anniversary of the Convention of the rights of the child by having an International Film Fest Nov. 9 at 8 p.m. in Taylor Little Theatre.