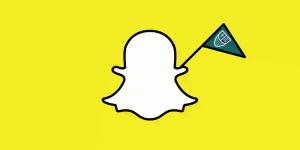 Today, the Snapchat app is up and running and has reached over 600 followers after Chris Norris, director of Marketing and Caitlin Ewing, a Marketing team member, decided to undertake the task, launching the app Feb. 25. Their goal was to provide students with a chance to tell their own “campus story.”

“One of the struggles early on was how to get the message out there: that Mercyhurst now had a Snapchat” said Ewing. “We wanted Mercyhurst Snapchat to be synonymous with being a Mercyhurst student.”

The Marketing Department launched its campaign by posting fliers around campus and on the tables in Egan and at the Hammermill Library, asking students to snap photos for the school’s Snapchat. Though the first week only produced 50 followers for the account, today with, the site’s 600-plus followers, it has accumulated numerous snaps and interactions from students.

The app took off during the recent spring break, gathering Snapchat stories from student activities and service projects.

“We want to showcase our campus to prospective students and portray what the student life is like by the students,” said Norris. “Mercyhurst has always been on social media, but this is supposed to be a student-to-student project that promotes ‘Laker Pride’ through engagement and connection from current students.”

Mercyhurst Snapchat has been implementing contests such as the “Best Snap of the Week” and creating themes to make snapping more appealing in order to engage with more students.

Students are also encouraged to participate in “live snapping,” which will attempt to portray a more realistic viewpoint of life on campus.

The app’s website states that it is “not a social media outlet being used for marketing or recruiting,” but rather as a “storytelling tool.”

However, not just any photo will make it onto the Mercyhurst Snapchat site.

The Marketing team monitors content and views the photos before approving which ones will be posted in order to avoid a negative image for the University.

“We want the snaps to reflect what’s fun about being a Laker. It’s a way to get to know our students a little better,” Norris said in an email to The Merciad.

Kaleb Schwab, a senior Business Management major, appreciates the chance to view more stories from fellow students on the site.

“I like that the school now has a Snapchat,” said Schwab. “I like watching the stories and the Laker Showdown was very cool.”

The Marketing team plans to incorporate more themes and activities into the app including additional contests and campus stories as they continue forward.