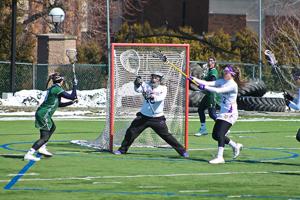 The Lakers began the game with a quick start, scoring their first goal within a minute of play. East Stroudsburg’s goalie was injured on the faceoff. With no available backup, a midfielder had to move to goalie for the remainder of the game.

“The East Stroudsburg goalie is usually very intense,” said Himes. “It was shocking for both teams when she went down. It didn’t really change our offense though; just took some time to get used to.”

Soon after, Jordan scored another goal, making the score 4-1. However, with 10 minutes remaining, the Warriors rallied back, scoring four straight goals to make it 5-4, Warriors, at halftime.

At 24 seconds into the second half, senior midfielder Taylor Ventre scored her first goal of the game, tying the game at five.

The Lakers then took a 7-5 lead after Himes and Jordan scored.

With 20 minutes remaining in regulation, Ventre hit the back of the net, followed by another from Jenna Schlagenhauf, her first of the game.

The Lakers increased the lead after Himes, Schlagenhauf and Gebhardt scored again.

With 7:15 and 6:26 left in the second, Himes scored her final two goals to give the Lakers a 14-6 lead. After a pair of goals from Jenna Schlagenhauf and Olivia Keirn, the Lakers took the lead by 10 points.

The Warriors scored one more goal, but it was not enough. The game ended 16-7, Lakers.

“We cleared our heads from the first half, supported each other, and both defense and offense made adjustments to turn the game around during the second half,” Himes said.

The team travels to Greensburg. Wednesday to take on Seton Hill.