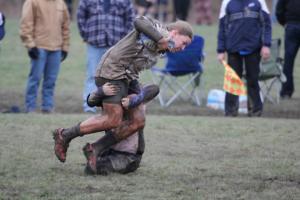 Contributed photo: Kelly Peters pushes through tackle. Peters said the first few games will not involve tackling but will be tag or flag.

Peters initiated the idea and began the club approval process. Seifert recently joined the effort and is now vice-president.

Mercyhurst had a rugby club several years ago; however, it fell apart due to the lack of participation and involvement.

“I’m excited to start this. It’s something that has a lot of potential,” Peters said.

At the end of March, Peters visited all of the freshman dorms, and over 50 freshmen showed their interest. There will be open field days when anyone can show up and play.

Peters explained some of the major differences in rugby. The end zone is called a try zone, the ball is passed backwards not forwards, there are 30 players on the field, and the play doesn’t end until a try is scored or the ball goes out of bounds.

The first games will be tag or flag, not tackle. After the club grows and students gain more experience, Peters said she hopes to get officially recognized under U.S. Rugby.

Peters said the next step is making the club a travel team so students can play games against other schools. Games for the first year or so will be 7-on-7 and co-ed. This will allow a more manageable grasp of the basics before advancing.

An open information meeting is taking place April 15 in Zurn 114 at 8 p.m. Peters and Seifert encourage anyone and everyone to stop by.

“We’ll just be going over the basics—ball handling, passing, the whole concept of rugby, stuff like that, said Peters. We aren’t tackling so hopefully that won’t scare people away. The hardest part was convincing a faculty advisor; no one wanted to sign on to a violent sport.”

The faculty member who decided to tackle the challenge, pun intended, was Dr. Benjamin Scharff, a new addition to the History department. He has no history with the sport.

“The biggest challenge was learning the ropes. This is a new club, with a new adviser, who is new to Mercyhurst,” said Scharff.

“It is nice to work with and get to know ambitious, engaged students such as those involved in club activities.”

Peters has been playing rugby for five years in Buffalo, N.Y., her hometown.

“I absolutely love it. You meet new people and make friends that you’ll have for life,” said Peters.

“It makes you stronger—not only physically but emotionally as well. You’re able to take a hit and keep going, on and off the field.