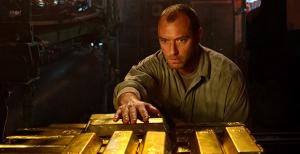 The movie “Black Sea” will be playing in Taylor Little Theatre.: miac photo

It is time to head back inside for another Sunday movie at the Taylor Little Theatre.

This week’s movie, “Black Sea,” follows the story of a modern-day mission to look for maritime treasure.

Robinson, played by Jude Law, is a veteran captain of under-sea salvage hears about a German U-boat that sank with a cargo of gold worth millions.

The crew of the expedition is 50 percent Russian and 50 percent British and almost immediately there are issues between the two groups.

Due to the mounting pressures the crew has a falling out and in a fight a crew member is killed.

Then, the Russians take over half of the ship with the British in the other half.

The ship is badly damaged but, they discover they are close to the U-boat.

Robinson learns that they have been set up and the man who funded the expedition is waiting to seize the gold as soon as the submarine surfaces.

They decide to remain submerged to try to keep the gold and avoid arrest.

When the sub begins leaking, Robinson evacuates the crew and explains that he will follow using an emergency lever.

The men surface and they learn that there is no emergency lever and that Robinson sacrificed himself.

Minutes later, an evacuation suit appears containing some of the gold and a picture of Robinson’s family.

The film will be shown in Taylor Little Theatre on Sunday, April 19 at 2:00 p.m.