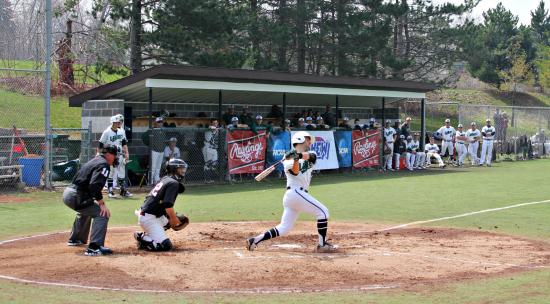 Alison Ockasi photo: Senior Giancarlo Saia drives an RBI single, sending a runner home in the first game against IUP. The Lakers lost, 8-7, but came back to beat the Crimson Hawks in game two, 12-9.

The Mercyhurst University baseball team split a pair of doubleheaders against Indiana University of Pennsylvania (IUP) on Friday and Saturday to improve to 30-4.

Junior pitchers Cam Knott and Ben Nolan sealed game one of Friday’s contest to earn a 3-2 victory over the Hawks.

Knott was the starting pitcher. He went for four and one-third inning, giving up only four hits while striking out eight Hawks before Nolan took the mound.

Nolan picked up his fifth win of the season when he entered a tied ball game with one out in the fifth inning. He went on to strike out five of the nine batters he faced.

“It’s nice having the depth for pitching that we do,” said Knott. “Each of us have something different to bring to the table, which keeps the batters always guessing.”

In game two on Friday afternoon, Mercyhurst fell to IUP, 3-0, which was also Jon Klein’s first loss of the season. His record is now 6-1.

Saturday, Mercyhurst traveled to IUP where they also split a double header, with both games going into extra innings.

In game one, the first five batters for Mercyhurst scored before IUP recorded the first out of the game.

Mike Schnurr recorded his first loss of the season as he gave up the winning run with the bases loaded on a walk-off single. Schnurr’s record fell to 2-1 as the Lakers fell, 8-9.

Nolan pitched for the last four innings. He earned his sixth win of the season, and improved to 6-0 with the 12-9 win.

Junior Hank Morrison led the Lakers in scoring. Morrison went four for five with three runs batted in and three runs scored, including a home run in the top of the seventh inning.

“It felt pretty good to be able to help the team,” said Morrison. “It would have felt better if we won both games, but that’s baseball.”

Mercyhurst’s next games are against Seton Hill on Saturday. Both teams are nationally ranked in the National Collegiate Baseball Writers Association. The Lakers are no. 6 while the Griffins sit at no. 9.

“We are taking it one day at a time,” said Knott. “We know it’s a big series but we will approach it like any other.”