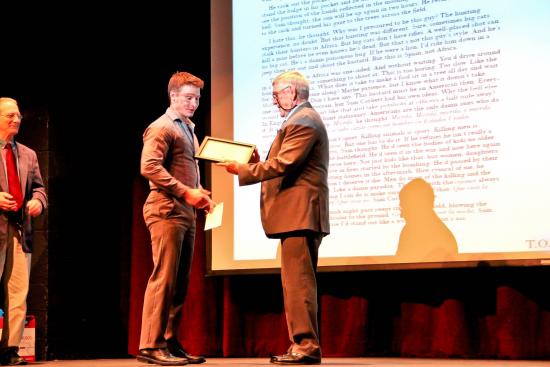 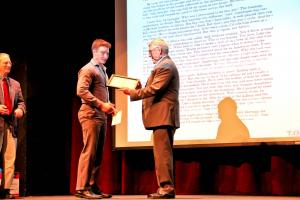 James Wallace (on left) was presented the third place award by P. Barry McAndrew (on right) for his “Hemingway Short Story” at t: Nhi Tran photo

The university’s Literary and Fine Arts Magazine, Lumen, was unveiled to the audience of the students, family, faculty and staff in the Taylor Little Theatre.

Its unveiling event on Thursday, April 23, marked the end of the Literary Festival at Mercyhurst University.

Kenneth Schiff, Ph.D., of the English Department began the event by thanking the various members of the magazine, including his fellow faculty advisors, Mrs. Jodi Staniunas-Hopper and Marnie Sullivan, Ph.D. and the Editors-In-Chief, juniors Caroline Magoc and Hailey Carone.

He also thanked the student editors who helped select the pieces for the magazine, edit the poems and short pieces of fiction that appeared in it, as well as the designers of the magazine and those who submitted their artistic and literary works to be displayed within it.

The winners of the submissions to Lumen were also announced, as well as the winner of the P. Barry McAndrew Essay in Literature Contest, which was dedicated this year to the late wife of P. Barry McAndrew, Elaine Marie McAndrew.

The student who took first place for the both his submission to Lumen and the P. Barry McAndrew Essay in Literature Contest was junior Communications and English major, Ryan Kushner, for his short story, “I Won’t Go,” and his essay, “O Sun, To Tell Thee How I Hate High Beams.”

After the winners were announced, Editors-In-Chief Caroline Magoc and Hailey Carone presented a slideshow of letters they had compiled from previous students of Dr. Schiff’s, thanking him for his excellence in teaching and wishing him a happy retirement after his 28 years of teaching for the English Department at Mercyhurst University.

There was an air of nostalgia as some former students seated in the audience took to the stage and gave their thanks in person, as well as many other current students who got up on stage to show their appreciation.

Afterwards, many took part in the open mic and share their work of poetry or fiction with the audience.

Overall, the celebration of literature was an evening full of laughter and accomplishment.

We can only hope that next year’s unveiling and Literary Festival, will be just as exciting and successful at the hands of a new faculty adviser.