For as long as music has existed, songs have always embraced the concept of having fun. In late 2008, three artists came together to take this concept one step further when an incredible vocalist, a multi-instrumentalist and an amazing guitarist decided to collaborate. Fun – the band – was born. 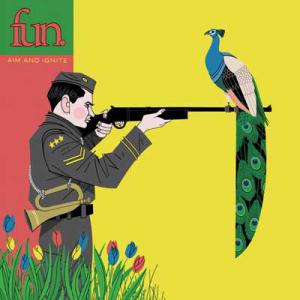 Contributed photo
With vocals by Nate Ruess, formerly of The Format, guitars by Jack Antonoff of Steel Train, and pretty much everything else being played by former Anathallo member Andrew Dost, Fun offers a very interesting yet overwhelmingly melodic sound that most people have never experienced.

Their debut album, “Aim and Ignite,” was released over the summer and left many critics speechless. Because of their unique sound, it is hard to pass criticism even if you are not a fan. Frankly, Fun’s music is an acquired taste, but for many who give it a shot, it ends up as a new favorite.

The album opens with the band’s first single, “All the Pretty Girls,” an upbeat song about pretty much leaving one girl because he’s been waiting for all the other girls. Not a love song, per say, but a catchy tune nonetheless.

A true love song on the album is titled “The Gambler.” With a repetitive verse ending, “So just take my hand, you know that I’ll never leave your side,” the song has been equated to “On Your Porch” by Ruess’s former band, The Format.

Following that is “Be Calm,” which is great advice in song form. The chorus of, “Be calm, I know you feel like you are breaking down, I know that it gets so hard sometimes, be calm,” is actually very encouraging. There are also a wide range of instruments used on the song, which gives it a very energetic marching band vibe.

One of the slower songs from the album is “Take Your Time (Coming Home),” and was written by Ruess about The Format’s breakup. The lyrics explore regret, forgiveness and moving on.

The album closes with “Barlights,” my personal favorite. It has a feeling of a mix of soul and showtunes, and is a feel-good song about just living life and feeling alive. It sums up the album very well because it alludes to the fact that the band members have come together through band breakups and awkward meetings and are still rocking out.

Fun is currently on tour with Jack’s Mannequin, parading their unique musical and lyrical flair across the country.